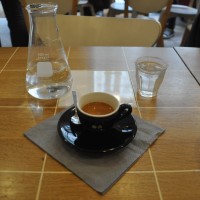 Coutume is something of an old hand in the (relatively new) Parisian third-wave coffee scene. On the left bank, on the relatively untrodden (by tourists, at least) rue de Babylone, it is both a roaster (which supplies the likes of Black Market) and a café in its own right. Of the three third-wave cafés I visited on my trip to Paris in May, character-wise it sits between Ten Belles, which felt as if it had been lifted straight out of Soho, and Black Market, which felt like a little French café/bar.

On the one hand, Coutume felt undeniably French, particular since it was the only one of the three to offer table service. It also seemed to have the most local custom. On the other hand, if I closed my ears and took down the menus, it too could have been lifted straight out of Soho, with its tiled counters and bare, undecorated walls.

Not that this is any criticism; of the three, I preferred the coffee at Coutume, although it was a close-run thing with Black Market. I also loved the atmosphere, it being a great place to drink great coffee.

That said, if the espresso machine hadn’t been working, it wouldn’t have been a disaster since Coutume also offers V60 filter, syphon (for two) and cold-brew, as well as hot chocolate, tea, fruit juice, soft drinks, beer and wine. I was spoilt for choice.

As it was, I had an espresso which I followed up with a macchiato. With hindsight, maybe I should have had a V60, but I wanted to see how Coutume’s coffee, made in its own café, compared with the way Black Market made it. As it was, there was little difference. The espresso was still a little too fruity for my palette and while it went well with the milk in the macchiato, it didn’t quite have the same wow factor that the Has Bean Jailbreak at Ten Belles had.

Other than that, I could find no cause for complaint and the service was faultless. I was provided with a carafe of water as standard (always a nice touch) and both drinks were well presented: the espresso in a classic (and hard to photograph!) black cup and the macchiato in a very fine glass.

The interior was spacious and stripped back, with walls tiled to about 1m in height but bare above, elaborate coving around the edges of the ceiling hinting at a more glorious past. It’s a strange space, with large windows at the front and funky light bulbs, with the feel of two narrow shop-fronts knocked together. The right-hand side is dominated by a massive tiled counter on which sits the espresso machine and all manner of other coffee-making paraphernalia. There is also a large cake cabinet built into the counter and what looks like a food preparation area behind that. Right at the back is the roaster where Coutume roasts all its beans.

The main seating is opposite the counter behind what would be the other shop-front. It consists of two rows of square tables, pushed together in communal fashion. There are also a few isolated square tables and, further back, a bizarre, narrow space with another row of tables and walls on three sides which looked distinctly cramped and claustrophobic.

I picked a poor time to visit, right at the end of the day, when the staff were clearing up. Despite this, I really liked Coutume and would like to come back during the day. As well as coffee and cake, Coutume does food and you can buy a wide range of beans. It’s also the one place that was obviously doing coffee to go from a small takeaway bar right at the front of the café. This is something that seems to have been slow to catch on in France; I can’t imagine going into most traditional cafes/bars in France and asking for “un café a emporter”.

You can also see what fellow-blogger Bex of Double Skinny Macchiato made of Coutume (she also visited Télescope) and what I made of it on my return in 2014.