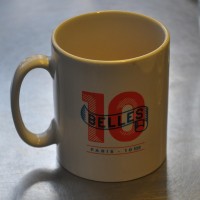 Ten Belles, just off the Canal St Martin, in a lovely part of the city, is a fairly recent addition to the Paris coffee scene, having opened in September 2012. However, serving Has Bean coffee in distinctly British/North American surroundings, it is most definitely not a traditional Parisian café. Not that there’s anything wrong with that, just don’t come here expecting table service, stuffy waiters and café crème: Ten Belles wouldn’t be out of place in the heart of London or New York.

A small place, with a clever mezzanine section above the kitchen to provide additional space, Ten Belles is proving a hit with the ex-pat crowd judging by the amount of English spoken and the accents on display during my visit.

Ten Belles has a commendably limited (and typical for Paris) espresso range: espresso, melangé (with hot water; close to a long black/Americano), noisette (with steamed milk; close to a macchiato or cortardo) and cappuccino. All come as double shots, the size determined by the drink. There’s also Aeropress and Chemex options, filter coffee, tea, hot chocolate (all in really nice Ten Belles mugs) and Luscombe soft drinks to reinforce the British link.

I should say at the outset that I really like Ten Belles, otherwise I wouldn’t be writing about it. However, if you’ve come to Paris for a typical Parisian café experience, it’s not for you. Which begs the question, why am I writing about it?

Well, firstly, Paris is full of places offering a typical Parisian café experience (for example, Café de Flore), while Ten Belles and its ilk are rare. There’s also the potential charge of hypocrisy. Let’s face it, I rave about Bar Italia, an Italian espresso bar in London and recently went to Boston, New York and Montréal where I sought out old-style Italian cafés. So, who am I to complain about a café offering Brits/Americans (and the locals) the sort of experience they could get back home in Soho (either the London or NYC version)?

Ten Belles packs a lot into its narrow store-front. For example, there’s precious little space between the counter on the left and the four small square tables opposite, so if someone is ordering/paying, you can forget about moving between the front and back of the store. The mezzanine, at the back above the kitchen, adds another four tables, accessed via a narrow staircase. A couple of stools squeezed between counter and window, using the windowsill as a table, and a bench outside on the pavement, complete the seating options. The seating, which is surprisingly comfortable, is either on the aforementioned folding stools or on benches against the walls.

Places such as this can get claustrophobic, especially when busy. However, the white-washed walls, light wood, high ceilings and big front windows go to make a bright, open space. One note of caution though: while it wasn’t a warm day, it was quite hot and humid on the mezzanine level, making me wonder what it’s like in the summer.

Ten Belles serves Has Bean coffee, with the new Jailbreak espresso blend to the fore. I tried it with great optimism, but sadly it reinforced my prejudice that Has Bean doesn’t roast beans the way I like them. There was nothing wrong with my espresso; it was well-made and well-presented in a beautiful white cup, full of body, with a thick crema. However, that’s where my appreciation ended: it’s even fruitier/sweeter than a typical Has Bean blend. Definitely not to my taste.

That said, such coffee often goes really well with milk, and so it was with the Jailbreak. I had a noisette and it was superb, easily the best coffee with milk of the trip and that’s saying something. I had some excellent scones with my coffee, very atypical for France, but, in my defence, all that was left late on in the day.

I had a chat with the barista, Joe, who it turns out, is from Newcastle (aside: all the best Newcastle baristas are called Joe). Sadly I missed the owner, Tom (whose motto, “Drinking good coffee is sexy” adorns the A-board outside), who was taking one of his two days off a week. Joe confirmed my suspicion that Ten Belles is unashamedly aiming for the ex-pat crowd. It’s clearly doing very well; I’d say that at least half the people were regulars who knew Joe by name.