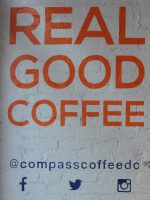 Compass Coffee was the final stop (of three) on my latest (very brief) visit to Washington DC back in February. Located on 7th Street in the north west quadrant, Compass is near the likes of La Colombe [coming soon to the Coffee Spot] and just to the east of Peregrine Espresso and Slipstream over on 14th Street. It’s also a relative newcomer, having opened towards the end of 2014.

From the outside, the low, single-storey, brick-built building looks fairly small, but stepping inside, it’s surprisingly large, going a long way back and feeling much wider than it looked from the street. The interior is big enough to house a large counter, an even larger seating area and, right at the back, a spacious roastery [coming soon to the Coffee Spot], home to a 30kg Loring roaster.

Compass is a curious mix of old and new, catering to a wide customer-base, including plenty of students. On the one hand, there are lots of blends, a wide variety of bulk-brew options and menu items such as gingerbread latte and peppermint mocha. On the other hand, there’s a fully-equipped Modbar and a choice of three single-origin pour-overs through Chemex or French Press. Naturally you can buy retail bags (or tins) of all Compass’ considerable output.

Compass Coffee’s brick store front has four openings, two windows on the left and a door and a window on the right. If you fancy sitting outside, there are benches in front of the windows, but otherwise, head inside, where the layout’s quite clever. Compass is effectively split into two, with counter/retail/coffee-to-go on the right and seating on the left. The counter occupies much of the right-hand wall, although there’s a large space between it and the door/window, which houses much of the retail section. If you’re ordering to go, you need venture no further since the till faces you as you enter, as do the cakes.

The remainder of the counter faces the seating on the left-hand side. You can sit the counter’s far end on one of three stools or take your chances in the main seating area. Several high, six-person tables run the length of Compass, effectively delineating the seating area from the counter. Beyond these is a mix of low four-person tables and smaller, round tables. There’s a window-bar at the front and, against the left-hand wall, are two bays, each with a wooden wall-bench and more round tables. Right at the back is a third (second?) space, roastery on the left, storerooms on the right. A counter looks into the roastery, seating provided by four bar stools.

Compass is a really bright space, with light from the windows at the front supplemented by two skylights on the left, plus plenty of lights. In look, feel and branding, it seemed to me a traditional American coffee shop, but one that has a Modbar and offers single-origin pour-overs (which are tucked away on the menu). It’s almost speciality coffee by stealth, something I was to encounter again in Providence.

I was fortunate enough to meet the owners, Michael and Harrison, plus the architect, George, who designed the store. Not your typical coffee geeks, Michael and Harrison met when as infantry officers in the Marines, drinking terrible coffee. A desire for better coffee led to an ever-growing obsession which, in time, turned into Compass.

From the start, they wanted Compass to be a roaster as well as a coffee shop, George designing the store around the roastery. It was also their intention to build a community, which, judging by how things were while I was there, seems to have been achieved. The decision to install the Modbar  (just the second in Washington DC after Slipstream) was part of this ethos, removing the barrier of a traditional espresso machine and encouraging interaction, engagement and transparency. The pour-over module was a little controversial at first, but it has proved to be consistent and reliable, freeing up the baristas to do other things (such as talking with the customers).

I tried a Chemex of the single-origin Ethiopian. Although a full sit-in café, Compass only serves in takeaway cups, so I wanted to use my Upper Cup. However, the standard pour-over volume is 16oz and the Upper Cup is 8oz, so we compromised, with half in the Upper Cup and half in a glass. This worked out really well, since I used the Upper Cup as a carafe and drank from the glass. My coffee matured and evolved as it cooled, turning into a very subtle and fruity brew by the end.

You can see what fellow coffee blogger, Bex, of Double Skinny Macchiato, made of Compass Coffee.