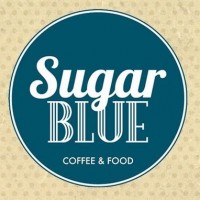 Sugar Blue occupies a long, thin spot on the pedestrianised rue de l’arche sèche. I knew from the moment I saw it’s A-board that it was for me. Its glass front is split into four equal parts, one of which is the door (on the right). The other three form a sliding window which can be full closed or one-third/two-thirds open, the latter an excellent option for letting in some air on hot summer afternoons.

There’s a bench outside, mostly for the cigarette smokers, but the bulk of the seating is inside. There’s a long, communal table on your left as you come in, with benches on either side. Opposite is a low coffee table with its own bench, followed by a round 4-person table. Beyond this comes the counter on left and more seating, in the shape of four high-tables, on the right. These are up against a very comfortable padded bench on the right-hand wall and each has a chair of its own. Finally, two high, blue metal chairs sit at the front end of the counter, backs to the door.

The counter is an ‘L’-shape, running along the left-hand wall and continuing along the back wall of Sugar Blue. The food, cake and till are arranged on the counter to the left, with a big chalkboard menu behind it, while the counter at the back is given over to the coffee-side of things, with a two group La Marzocco, grinders for the two espresso beans and a third for the filter.

Thanks to its glass front, Sugar Blue’s interior is pretty bright, aided by the décor. Two of the three walls are painted white, while the third, on right, is painted Sugar Blue blue. This goes well with the wooden floor and the light wood of the counter, giving it a natural feel. The atmosphere was rounded off while I was there with some pop classics playing quietly in background.

All the coffee is from Caffè Cataldi. Emmanuelle, who had previously worked in the likes of Paris’ Café Lomi, was the first to admit that they were still finding their feet with the choice of beans. I tried the second of the espresso beans, a Finca la Coptita Bio from Mexico, which was very well made, but a bit too bright and acidic for my tastes.

I followed this up with a Yirgacheffe Wote, which was prepared using a cafetiere (interestingly, cafetiere in French, at least in Sugar Blue, is “French Press”…). If I’m honest, this probably would have been better served by a V60 or Aeropress, but it was still a good cup of coffee, which improved as cooled.

I was there mid-afternoon, so didn’t get to try any of the impressive selection of homemade food, which included sandwiches, quiche, tarts and wraps. However, I was made to try an extensive selection of the cakes (honestly, Emmanuelle insisted; how could I refuse?). I had samples of the chocolate cake, lemon tart and caramel cake. They were all good, but the lemon tart was excellent, really sweet and sharp. However, the caramel cake was even better, with a rich sponge infused with a sticky layer of caramel. Sadly I had to leave before I could go back and eat the rest of the cake…

I’m indebted to Wilfred Gilbert (via Coffee Content) on Twitter for pointing me in the direction of Sugar Blue in the first place.