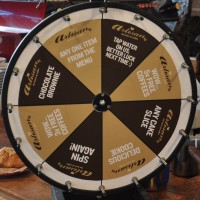 What’s going on? For the second time in a week I’ve visited a local chain and started with the first branch! This time, instead of going to Bath, I’ve popped up to Putney and the lovely Artisan. And, unlikely rainy Bath, it’s always sunny when I go to Putney. I really should come more often.

My first visit was on a busy Saturday afternoon in March last year, when I didn’t have my camera with me. Back then it was so busy that the queue waiting to order was all the way back to the door! Tables were at a premium and several people were sitting outside in the sun.

I’ve been meaning to return ever since and finally made it back with my camera 11 months later, when I returned on a Tuesday lunchtime, only to find it was almost as popular. Tables being at a premium again, I ended up in exactly the same spot, a little table for two by the door to the toilets!

Artisan serves up Allpress’ Redchurch blend on espresso, and these days has Berlin legends, The Barn, on filter, with regularly-rotating single origins. There’s an impressive range of cake and food too.

Artisan occupies a lovely corner spot on the junction of Upper Richmond Road, one of the main roads running through the centre of Putney and the much quieter Ravenna Road. Essentially square, Artisan’s blessed by wall-to-ceiling windows on two sides, which make it incredibly bright inside, so bright that on a sunny day the shades have to come out over the front windows. Even better, when it’s warm, the windows along the right-hand side (Ravenna Road) can be fully opened, concertina-style, so the café feels as if it’s spilling out onto pavement of the quiet side street. There are also four tables on Richmond Road and, while lovely in the sun, the road’s very busy.

You enter from the Richmond Road side, through a central door. To the left, the counter dominates, taking up about two-thirds of the space, with just enough room for a five-person window bar at the front. Immediately to your right is a communal table, with two more along the right-hand window. Five tables make up the remainder of the seating (four two-person and one four-person), arranged in the middle of the room.

Artisan’s predominantly wood, with wooden tables and floorboards and while the wall behind the counter’s bare brick, the rest are whitewashed, an interesting contrast to the red ceiling. Both times I visited, it was very bright, sunny and busy, but both times there were plenty of staff on duty, six on the Saturday, four on the Tuesday, so queues were kept moving, tables cleared and orders promptly delivered. All very efficient. It was also humming in that way only a busy coffee shop can, with gentle background music overlaid with 20 people chatting. Blissful.

The cake-laden counter is the focal point, the La Marzocco espresso machine to the fore, facing window, so you can (sort of) stand at the counter and watch the baristas at work (you will be in the way though). The till’s at far end, making you go past the cake to order, but it’s not the most obvious location, confusing me on both my visits!

On my first visit, many of the sandwiches were sold out, including the only vegetarian option, but I was saved by the specials menu with a choice of tart, soup or salad, all of which were vegetarian. I had the leek and cheddar tart, served hot with a little side salad. It was excellent.

I paired this with a piccolo made with Artisan’s house-blend, Redchurch from Allpress. I’ve had this many times before (most notably at the now-closed Brewsters N7). Served in a pleasingly small glass, it was much as I expected, the milk blending well with the coffee, while the milk itself was well-steamed and held its body.

On my return, I went for a Muruta from Kayanza in Burundi, roasted by The Barn and made through the V60. It was beautifully presented on a wooden tray with a carafe and handleless cup. I was also given a postcard (German on one side, English other) with extensive growing and processing notes (washed, for those who are interested), a change from the usual tasting notes. The coffee itself was surprisingly heavy on the palette, with fruity notes and good body. I paired this with a couple of slices of very crunchy sourdough toast.

September 2015: See what I made Artisan’s third branch, in Ealing.