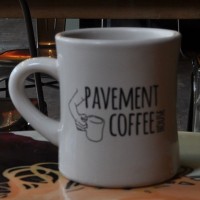 As much as I liked the original Pavement Coffeehouse on Boylston, which I visited last year, in comparison, I adored the Gainsborough branch. Both are in Boston’s Back Bay and are, in fact, just ten minutes’ walk from each other, albeit on different branches of Boston’s Green Line. Along with the equally close Render Coffee, they make the neighbourhood a go-to area for great coffee.

All the Pavements serve Counter Culture coffee. At Gainsborough, different beans, which change every two months or so, are available on espresso, bulk-brew and hand-pour, plus there’s a decaf option too. During my visit, they were all single-origins: a Bolivian Nueva Llusta on both espresso & bulk-brew, with a Kenyan Muthonjo on Aeropress (there’s usually a Chemex option on hand-pour as well), while the decaf was Peruvian.

The food is similar to Boylston: bagels and lunch/breakfast sandwiches, plus salads and cake. However, in terms of layout and atmosphere, Gainsborough and Boylston are like chalk and cheese. While Boylston is long, thin and very hectic, Gainsborough is square (in shape) and much more relaxed. There’s probably not much to choose between the two in size, but Gainsborough feels bigger and is certainly more spacious.

There are now six Pavement Coffeehouses, the first being the Boylston branch I visited last year. Perhaps the most elegant of the six, Gainsborough has an essentially square layout, with a generous window running across the front, punctured by a recessed glass door in the left-hand third. Window bars occupy the spaces either side of the door, a high one on the left, with enough space for three, and a low, long one on the right, with five well-spaced chairs.

The window stretches from the top of the (low) window-bar about halfway to the ceiling, so the interior’s bright without being flooded with light. On the gloomy June day I was there, this led to an interesting contrast between a relatively bright front and a more subdued back, where tall, narrow windows in the right-hand wall and numerous light-bulbs helped illuminate matters.

There’s an L-shaped counter in the back left-hand corner, espresso machine to the fore, followed by the till. At the back, a window allows takeaway salads and sandwiches to be collected independently of the coffee queue. Although slightly unconventional, the layout works superbly well. There’s a clear line-of-sight/path from the door to the shiny silver La Marzocco, at which point the angle of the counter naturally funnels you towards the till, where you enter the queuing system. This deposits you, post order, back at the espresso machine to collect your coffee (sadly, with the noticeable exception of the likes of the lovely Render Coffee, America’s dominated by a counter-service model). This layout means that, unlike Boylston for example, you don’t have to fight your way past lines of people to pick up your coffee if you’re drinking in.

As well as a better layout, Gainsborough has even better seating! Three curved bays/booths occupy the left-hand wall between window and counter, while a long, comfortable padded bench with six, colourful, round two-person tables runs along the right-hand (bare-brick) wall. It’s followed by a lovely fireplace, beyond which are a couple more two-person tables, with a four-person table against the back wall.

In the middle of the room, a J-shaped, curved sofa unit has pride of place, along with an eight-person communal table. Finally there’s a circular bar with seven bar stools running around a pillar in the centre of the room, roughly between the till-point and fireplace.

Having such lovely surroundings, I wanted to fully sample the coffee, starting with the Kenyan through the Aeropress. The tasting notes included the word “sharp”, but despite this, I enjoyed it. On first tasting, it was a little bit too sharp for me, but as it cooled, it lost a little of its edge and seemed to develop more body, but without losing its juicy, fruity nature. I paired this with a very tasty and very green baby spinach salad, bathed in a vinaigrette that was neither overpowering nor too sharp.

I followed this with the Nueva Llusta espresso. This was also quite fruity, but not too sharp, with a good mouth-feel. I paired it with an excellent, chewy, cookie that had great texture and wasn’t too sweet. Finally, I tried the decaf as a cortado, the coffee providing a good counterpoint to the milk. The milk itself was really rich and well-steamed, holding its pattern to the bottom of the glass.