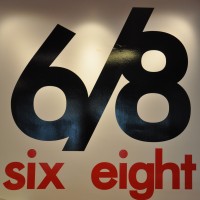 The original 6/8 Kafé (now sadly closed), one of Birmingham’s first specialty coffee shops, was a cosy, compact spot on Temple Row, right in the centre. The new 6/8 Kafé is about as far away from that as you can get in almost every respect except that both serve excellent coffee. Located in Birmingham’s new Millennium Point development, the new 6/8 is filling a valuable niche: serving speciality coffee in a mass-market setting.

Millennium Point is a science centre extraordinaire, housing Birmingham’s Thinktank science museum and faculties from both Birmingham City University and Birmingham Metropolitan College. And 6/8 Kafé. Frankly, I take my hat off to Devinder, 6/8’s owner, both for getting such a high-profile spot and for having the bravery to go for it. It’s exactly the sort of spot you’d expect to see a run-of-the-mill chain, so it’s refreshing to see somewhere serving excellent coffee.

And make no mistake, although Millennium Point lacks the original 6/8 Kafé’s cosy atmosphere, the quality’s every bit as good. The only compromise is dispensing with hand-pour filters, sticking instead to a single Has Bean blend on espresso. That said, it’s a pleasant place to sit and drink your coffee or quickly refuel before/after visiting Thinktank.

The main trick with the new 6/8 Kafé, which opened in February in Birmingham’s shiny and equally new Millennium Point, is finding it. Spread over five floors, with entrances on all but the top two floors, Millennium Point offers plenty of opportunity to get lost and I should know, having explored most of them. There are helpful floor-plans of the sort you get in shopping malls, but unfortunately they don’t have 6/8 Kafé on them…

I’d actually given up and was coming down disconsolately to the ground floor when I looked out of the lift door on the second floor and there it was, right in front of me! Several frantic button-presses later and I reached my destination! If, unlike me, you actually want to find 6/8 Kafé rather than wander around aimlessly, I suggest entering from Jennens Road, where you come straight in on the second floor. Follow the signs for Thinktank, and, before you get there, on your right, is 6/8 Kafé. It’s really quite hard to miss…

6/8 occupies what can best be described as a curved bay scooped out of the wall. About three times as long as it is wide, one end is slightly wider than the other. The layout is very simple: the counter fills the back, while the tables (five small, four-person tables and three large, four-person tables) fill the front. The décor’s also very simple, with a red floor and back wall in contrast to the white walls and ceiling, all offset by the wooden counter.

A tape barrier (of the sort that you find when you’re queuing to get into museums) separates tables and counter. Coming from the Jennens Road entrance, you enter on the right, the barrier leading you along the counter, past the food and cake to the till, where you order. Keep on going, past the grinder and espresso machine, and you’ll get to the collection point, where you can wait for your coffee if you’ve ordered takeaway.

One thing to beware of if you’re a cup-snob like me, is that 6/8 Kafé can only serve its coffee in its (admittedly very fine-looking) takeaway cups, so if you don’t like paper with your coffee, bring your own. Fortunately I was road-testing my new Frank Green 8oz reusable cup at the time, which saved the day!

On the other hand, since all the coffee’s served in takeaway cups, if it’s really busy, you can always take your coffee and make use of the multiple other seating options in Millennium Point.

While I was there, 6/8 was serving Has Bean’s ubiquitous Blake blend, a decent workhorse which went very well in my creamy, smooth flat white. There’s also decaf and, while chatting with the friendly staff, I learnt of plans for a second grinder which would allow for a guest espresso. In the meantime, other than cold brew, there’s no filter or pour-over but, refreshingly for somewhere appealing to the mass market, you can get a piccolo or cortado. There’s also a decent selection of Suki tea.

If, like me, you’re feeling peckish, there’s a decent food selection, including toast for breakfast, a range of sandwiches (regular and toasted) for lunch, plus a couple of salads, and small selection of cake. I can vouch for the toast, by the way.

Note: 6/8 Kafé was a runner-up for the 2015 Most Unlikely Place to Find a Coffee Spot Award and was one of five short-listed independent cafés for the Café Life Café Design of the Year Award.

If you enjoyed this Coffee Spot, then check out the rest of Birmingham’s speciality coffee scene with the Coffee Spot Guide to Birmingham.