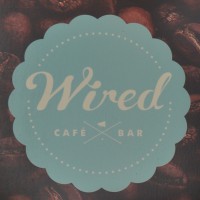 In the two years since I last visited Nottingham, its coffee scene has exploded, with various spots opening up. Representing the hipster end of the market is Pelham Street’s Wired Café Bar, with its scaffolding-pole furniture, exposed air-conditioning ducts and quirky manner (its website, for example, proudly proclaims, “we’ve got a La Marzocco… and we’re not afraid to use it!”). There’s a basement too!

Oh, and it’s got some cracking coffee: Allpress’s Redchurch blend and decaf on espresso, two single-origins guests on Chemex. These rotate as-and-when, with Wired trying to have at least one from local start-up, Outpost Coffee Roasters. The likes of Allpress and Workshop also make regular appearances. Wired fulfils the “bar” side of the name with a small range of bottled beer and wine, although these are very much in the background, the focus firmly on the coffee.

Wired also has a good cake selection and an impressive food offering, particularly given that it’s all prepared in a tiny kitchen behind the counter. There’s typical British breakfast fare: eggs, sausage and bacon, all on a variety of toast and muffins, which can also be had separately, while lunch consists mostly of sandwiches, with one or two specials.

My previous visit to Nottingham was for the 2013 Ashes, when my experience was limited to the walk between the train station, south of the centre, and Trent Bridge. Hence I entirely missed out on what turns out to be a very pleasant, compact city centre, full of lovely old buildings and broad, pedestrianised streets.

Wired Café Bar is on one of these, Pelham Street, not far from the 200 Degrees Coffee Shop, right in the heart of the city. Like 200 Degrees and other near-neighbour, The Pudding Pantry, there’s seating outside on the quiet street, shaded by Wired’s north-facing façade. A couple of four-person picnic tables, complete with wooden benches, are in a fenced-off area in front of the window.

The door’s on the left, up a small step, where you’re confronted by the counter, which occupies the whole left-hand side, La Marzocco to the fore. Edge yourself to the right and you’ll find a spot where you can order, which also serves as an impromptu brew bar when anyone orders a Chemex, the coffee prepared in full view for all to see. Confusingly, the till’s down the other end of the counter, past the cake and sandwiches, so it’s just as well that you don’t pay until you leave.

Other than a small, raised area in the window Immediately to the right of the door, all the seating is opposite the counter. Two four-person tables with wooden benches and power outlets line the right-hand wall, with a two-person table beyond them. Although Wired’s not that wide, two further two-person tables are squeezed into the centre of the room, one level with the ordering point, the other with the till. A five-person window-bar occupies the raised platform, a scaffolding rail stopping you accidentally falling off into the rest of the shop.

Right at the back, a four-person table sits by a flight of stairs, cunning disguised to look as if it’s going up. Instead it leads to a cosy basement, redolent with a pair of armchairs and a couple of sofas (one of which is massive). There’s a bar against the wall, plus a six-person communal table, with a two-person table tucked into the corner. This is in stark contrast to the upstairs, with its high ceiling (almost as tall as wide) and glass front, which makes it very bright, even though it’s north-facing.

Turning to the coffee, my eyes lit up when I saw the combination of Chemex and local roaster, Outpost Coffee Roasters. My only dilemma, whether to have the Colombian El Meridiano or the Ethiopian Yirgacheffe (both from Outpost), was swiftly resolved: someone had drunk all the Yirgacheffe! My Colombian, a very mellow cup, beautifully prepared and served in a carafe, was quite different from the fruity filters and sweet espressos I’d been having that summer. It went down very easily, holding its own as it cooled, while allowing a slightly acidic (and pleasant) aftertaste to emerge.

Wanting to try something different, I ordered a cortado, which was surprisingly (and pleasingly) small. Well-balanced, dark and strong, the coffee itself held no surprises, being very typical of Allpress’s Redchurch blend. I paired this with a Nanaimo bar: apparently a Canadian biscuit, coconut & chocolate based-thing, with custard filling and chocolate topping; a touch too sweet for me.