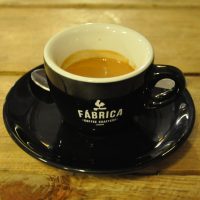 Like Lisbon’s branch of the Copenhagen Coffee Lab, which I’d visited previously in the day, Fábrica Coffee Roasters is not a home-grown affair, but it feels more Portuguese. Long, thin and very basement-like, it has a lot in common with a Portuguese café bar, although with its comfortable sofas, upcycled furniture, hand-made counter and lights encased in cages, it wouldn’t look out of place in Shoreditch!

At the heart of Fábrica is the coffee roasting operation, which is tucked away beyond the counter at the very back of the store in a space that doubles as a retail area. Here the very shiny 5kg Probatone roasts all of Fábrica’s coffee, which you can also buy to take home. Like the Copenhagen Coffee Lab, Fábrica has an impressive output, with three options on espresso and another three on filter, which can be had as an Aeropress or Kalita for one, while the V60 and Chemex options come either for one or two.

There’s a decent menu, all the food prepared on-site in the kitchen to the left of the counter, plus lots of cake. This being Portugal, it’s not just coffee, of course, with beer and wine also making an appearance.

Fábrica Coffee Roasters is on Rua das Portas de Santo Antão, one of the streets running northwest away from Praca do Rossio at the northern end of the Baixa in the heart of Lisbon. On the right-hand side of the street, you’re immediately struck by the raised, fenced-off patio jutting out across the pavement. This offers six two-person tables, ideal if you want to sit outside. Alternatively, head on into the shady and cool basement-like interior (although whether it’s cool when the roaster is going full blast is another matter). In keeping with the basement feel, there’s the door, plus a window on the other side of a central brick pillar, but that’s it as far as natural light goes. The subdued lighting, particularly at the back of the store, combines with the exposed brick walls, bare wooden floorboards and low ceilings to enhance the subterranean feel.

The layout is fairly simple, with the door on the left, and Fábrica stretching out ahead of you, seating lining either wall. The counter is about three-quarters of the way back on the left, with more seating opposite it and, beyond it at the back, the roastery/retail area. As well as being able to buy Fábrica’s output by the bag here, there’s a good selection of coffee making equipment that you can take home with you.

The seating is an eclectic mix, with something for everyone, from the small, round table in the window to the pair of comfortable sofas up by the counter. Along the way, there are armchairs, communal tables, and, right at the back, opposite the counter, a neat little booth. If you can’t find somewhere you like, it’s probably because someone else has got there before you! Wherever you sit, you don’t have to worry: Fábrica offers a full table service. This is Portugal after all!

As I mentioned in the introduction, Fábrica isn’t a home-grown affair, set up in 2015 by a pair of brothers from Russia. It’s also the first specialty coffee shop/roaster I’ve come across in Portugal (Copenhagen Coffee Lab doesn’t count since the roastery is back in Copenhagen). What’s more, of the five coffee shops I visited, it’s the only one which has what I’d call a modern espresso machine/grinder set up.

Fábrica roasts mostly single-origins, either for espresso or filter, although there is also a house-blend on espresso. This is joined by a pair of single-origins (Ethiopian and Colombian while I was there). There are several options on filter too (Brazilian, Colombian and Ethiopian single-origins during my visit). I asked the barista for a recommendation and it was suggested that I tried the house-blend, which I had as an espresso.

This was a quite bright, acidic coffee, a little sharper and a little less well-rounded than I’d prefer, but very pleasant nonetheless. Intrigued, I decided to try it in milk, ordering a flat white. Often a coffee can taste strikingly different in milk, but here it was more of an evolution in taste, the brightness of the coffee cutting clearly through the milk, while the acidity provided an interesting counter-point to the milk’s sweetness. What’s more, it became increasingly balanced and rounded as it cooled, which is something that I rarely get in flat whites, associating that sort of behaviour with filter coffee.