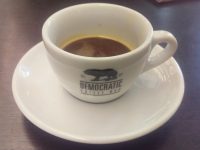 There’s something about (speciality) coffee and books in Copenhagen. First there was the latest addition, Prolog Coffee Bar, a café and magazine shop, plus old hands, Forloren Espresso, replete with magazines. And there’s today’s Coffee Spot, Democratic Coffee, sharing its space with the city’s central library. You can’t get more books than that! You can sit in the coffee bar itself, which is long and thin, but which can be quite noisy, or decamp to the library, where there’s a choice of tables and comfy armchairs in the windows.

Everything in Democratic is made from scratch in the kitchen behind the counter, including the bread and pastries. Everything except the coffee that is, which is roasted off-site on a shared roaster, Democratic roasting two or three times a month. There are two single-origins on espresso, one for black coffee, one for milk, plus two more on filter, one available as a hand-poured V60, the other on bulk-brew.

The coffee changes every two-three months, Democratic buying a 700kg pallet with three/four different green beans. Once they’re gone, Democratic moves onto the next set of beans. Democratic doesn’t have different roast profiles for espresso/filter, regularly swapping which bean is on which method.

Attached to the right-hand side of Copenhagen’s Central Library on the semi-pedestrianised Krystalgade, the Democratic Coffee Bar is long and thin, with a very modern feel. The counter runs along the back of the store, while a high bar runs along the front, punctuated by four tall, narrow windows, its stools arranged in pairs, two for each window. However, if you’re feeling particularly perverse, you can move one and sit facing the wall. Outside on the narrow pavement, next to a set of bicycle racks, are some wooden tables.

The coffee bar has two entrances. The first, direct from the street, deposits you at the “wrong” end of the counter. The second entrance, which is at the far left-hand end, leads in from the main seating area, which Democratic shares with the library next door. Coming in this way, you find yourself standing next to the sandwiches and pastries, which are closely followed by the till. Then comes more pastries and a gap, before the filter station, espresso machine & grinders make an appearance. You’re now at the far end, by the door, which leads out to the street. It has a certain logical flow.

There’s a table at this end of the counter, next to the right-hand wall, which is occupied entirely by shelves housing coffee-making kit and a series of (non-coffee) books. However, if you’re looking for tables, then you’re much better off in the library, where the entire front of the ground floor is given over two seating areas which flank the recessed door. Technically, this space is rented from the library by Democratic, but no-one minds who sits there. In all, there are around 20 tables split equally between the two sides. Access is to the coffee bar is through the right-hand seating area, either up a couple of steps or via a long ramp (making the coffee bar wheelchair/pram accessible).

As much as I like sitting at window-bars if I can, I quickly abandoned the one at Democratic since it was far too high to comfortably use my laptop. It’s also not the quietest place, with a constant stream of customers coming in to order and milling around waiting to collect their coffee. My timing was particularly bad, since just as I arrived, so did several parents with small children who thought running up and down the coffee bar and making lots of noise was the best thing in the world. It was, however, marvellously quiet once they’d gone.

I had a very fine almond croissant, still warm from the oven. Of all the almond croissants I’ve had, this had the most almonds per square centimetre of surface area, coupled with an amazing, gooey patisserie-cream filling. The croissant itself was surprisingly (in a good way) crunchy, with a rich, flaky dough. You’d be hard-pressed to find a better example of its kind.

During my visit, the Hunkute from the Sidamo region of Ethiopia was on V60 and espresso, so I had to try both. I began with the V60, a subtle, smooth coffee, not unpleasant in any way, but not hitting any great heights, although it more than held its own as it cooled. As an espresso, though, it was very different, a much brighter coffee, but still retaining the well-rounded balance of the filter.