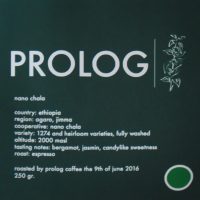 Outside of the Lisbon branch of the Copenhagen Coffee Lab, my first ever visit to a Danish coffee shop (and indeed, to a Scandinavian one) was to Prolog Coffee Bar, Copenhagen’s newest speciality coffee shop, which opened just over three months ago. This was more convenience than anything else: I’d just arrived from Dublin and of all the places I’d been recommended, it was the closest (a 15-minute walk) to my hotel where I’d be staying for work for the rest of the week. However, with last Sunday afternoon free, I was determined to explore!

Prolog isn’t a huge place, occupying what was an old bookshop and retaining something of its character, as well as still selling magazines. The owners, Jonas and Sebastian, work at the shop and I met both of them. Jonas, who used to roast at Democratic Coffee, now does the roasting for Prolog, while Sebastian’s also learning the trade. At the moment, things are small-scale, with just an Ethiopian Nano Chala on espresso, joined on filter by a Kenyan, both through the V60. There’s also a range of iced-coffee, plus an innovative selection of food and food products. In that respect, Prolog’s no ordinary coffee shop!

Copenhagen’s Meatpacking District, in Vesterbro, west of the central station, is an up-and-coming area, filling up with bars, restaurants and, now, Prolog Coffee Bar. On Høkerboderne, a street lined with trendy restaurants, Prolog manages to catch the eye with an interesting window and a neat feature: the menu’s written on both sides of the mirrored door. You can sit outside on the street if you like, just grab a plastic stool and plonk it down where you will. Plenty of people were doing just that, chasing the summer sun as the afternoon wore on, getting ever further out into the street.

I, in contrast, headed inside, where I found a coffee shop not unlike Paddington’s Kioskafé, although Liverpool’s The Cow & Co Cafe might be a better analogy since, like Prolog, it started as a shop (design, in this case) and morphed into a coffee shop. For Prolog, the journey was a little different, since it was already a bookshop and Prolog effectively took it on, continuing to sell magazines (which line the right-hand side of the store) while shifting the focus very clearly to coffee.

Long and thin, the door’s on the left-hand side, while everything else is on the right. There’s a comfortable window-seat immediately to your right as you enter, then, on the right-hand wall, two projecting shelf-tables, one two-person and one solo. That’s pretty much it for seating until you get to the counter, although there’s a free-standing high, square table in the middle of the room which you can stand at if you want.

The counter’s at the back, again on the right-hand side, till first, along with a few bits and pieces, including huge marshmallows on sticks. You can have these toasted if you wish, the only twist being that you have to do it yourself (Prolog providing a mini-camping stove for you to do the roasting on!). There’s also a small range of food, centred on crisp-bread, which you’ll find hanging on a rack suspended from the ceiling.

After all this comes the relative sanity of the La Marzocco espresso machine and Mythos One grinder, followed in turn by an EK43 and the brew-bar, where there are two more bar stools allowing you to sit and watch your coffee being made. Guess where I ended up…

Prolog only roasts two green beans at the moment, an Ethiopian and a Kenya, although a Guatemalan and an El Salvador are arriving soon. During my visit, the Ethiopian Nano Chala was on both espresso and V60, so naturally I had both, expertly made by Sebastian. As an espresso, the Nano Chala was really juicy but not acidic, giving it a lovely balance. The V60 was considerably mellower, but retained the same juiciness I’d detected in the espresso.

I sat at the back and chatted, during which time there was a sudden run on V60s, Sebastian making them almost continuously, a stream-lined process helped by Prolog having pre-weighed its doses for the V60. Sebastian just had to drop the contents into the EK-43, which was fitted with an Aeropress funnel in place of its hopper, a modification I first saw at Foundry Coffee Roasters in Sheffield. After that things quietened down on the filter front and the constant stream of visitors went back to ordering cappuccinos, which I’m told is the drink of choice.

Before I left, Jonas got me to try Prolog’s take on affogato. This uses soft-serve ice-cream, with espresso applied by syringe and topped by grated chocolate (of Prolog’s own making). It was very different and tasted sublime, the chocolate making all the difference!

While I was at Prolog, I also ran into Ben of La Cabra, a Danish roaster increasingly making a name for itself across Europe. Ben, like me, had just returned from the World of Coffee in Dublin. Speciality coffee really is a small world!