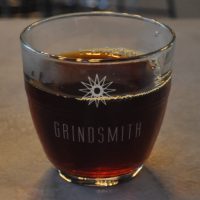 Grindsmith has expanded rapidly since its successful Kickstarter launched the pod just three short years ago. The third of its (for now) four branches is in Media City, which opened six months ago, following on from the original Pod and Deansgate. Media City is the probably the most traditional coffee shop setting of all four (the Pod is, well, a Pod, while the other two, Deansgate and Cross Street share space with other organisations. Meanwhile, this one stands alone on a corner to the west of the new Media City development in Salford.

Grindsmith has always built its reputation on coffee excellence, but in Media City, it has added a large kitchen, enabling it to expand its food offering. There’s a full and impressive brunch menu, served until four o’clock, plus something entitled “food on the go”, including breakfast, lunch and sandwich options. Finally, there’s plenty of cake. The coffee offering is centred around the (white) Black Eagle espresso machine, with a single-origin from local roasters, Heart & Graft, on the main grinder and decaf on the second grinder. This is backed up with a single-origin on bulk-brew and another available through the Kalita Wave, both from guest roasters.

Grindsmith’s Media City branch occupies a corner unit at the intersection of the inspirationally-named blue and red roads in Salford’s (now not so) new Media City development. A few minutes’ walk from the Media City tram stop, it’s a block northwest of the footbridge across the Manchester Ship Canal to the Granada Studios, which face-off against the BBC from the other side of the water.

It’s almost a cube, being slightly longer on one side than the other, and not quite as tall as either. Even so, it has wonderfully high ceilings, with enough space for a mezzanine level above the counter, the stairs running along the back wall. You enter opposite the stairs, at the right-hand end of the red street side, where you find the counter running along the right-hand wall, a spacious work area behind it and the kitchen behind that, visible thorough a hatch in the wall.

Being a corner unit, two of Grindsmith’s four sides are occupied by windows, tall enough to reach the level of the mezzanine. Ironically, the mezzanine, set back above the counter/kitchen, doesn’t have any windows, and therefore has the least natural light, a situation not helped by the black-painted walls and ceiling. On the other hand, Grindsmith makes the most of this, with subdued lighting giving it an atmospheric, moody feel. It’s uncluttered up here, with just six tables. Two are on the left, directly ahead of you at the stop of the stairs, two more are at the front, overlooking the counter, and the final two are against the back wall.

Downstairs, it is similarly uncluttered. There are two rows of three two-person tables which run up the middle of Grindsmith, perpendicular to the counter. A window-bar to the left of the door runs the full width of the front of Grindsmith, with a one third length window-bar on left, looking out in the direction of the canal. The counter, with its interesting geometric design, is a bright white, while the window-bars are wooden, the tables and floor a stone grey, and the walls and ceiling painted black. A splash of colour comes from a glorious stained glass window in the middle of the left-hand wall.

Grindsmith’s house-roaster is Heart & Graft. These days, Grindsmith only serves single-origins, with the espresso currently from the Democratic Republic of Congo. The filter options come from guest roasters, currently from London’s Caravan and Leeds’ North Star Micro Roasters. There’s usually at least one single-origin on pour-over, although if you ask nicely, the staff will make you any of the coffees on the retail shelf. The espresso is there until it’s gone, usually a month or two, at which point Grindsmith moves onto the next one. Meanwhile the filter options change ever every week or so.

I had a Nicaraguan single-origin from North Star as a pour-over, a smooth, well-rounded brew with a subtle flavour. It was served, as it should be, in a carafe with a small, and beautiful, Grindsmith-branded glass on the side. Alas, I was just too late for brunch, so I paired my coffee with an excellent Bakewell Tart (well, slice). With a lovely, moist sponge, there’s enough raspberry jam to give you the flavour without overwhelming you, plus a generous sprinkling of almonds. It disappeared very quickly.