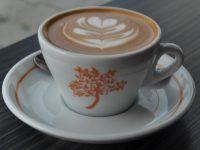 Badger & Dodo is a curious beast, and not just for its name. Starting life as a roastery in Cork in 2008, Badger & Dodo supplies coffee shops across Ireland. Except for the west coast. So, to plug the gap, in October 2014 Badger & Dodo opened its own café in Galway. As you do.

Occupying the corner of a modern, glass-walled building, Badger & Dodo is a bright and awkward-shaped spot. Just around the corner from the train station, bus station and coach station, there really is no excuse not to visit if you arrive in Galway by public transport (unless you arrive in late afternoon, when Badger & Dodo is closed). If, like I was, you leave by public transport, be sure to allow an hour or two before your train/bus/coach to sample the full coffee menu. Although maybe that’s just me…

Badger & Dodo serves a single-origin on espresso (which changes every five/six weeks or so) and another on filter through V60/Aeropress/Chemex (which changes every week or so). You can also buy a large range of single-origin beans. Meanwhile, if you’re hungry, there’s a wide selection of handmade sandwiches/toasties, plus an excellent-looking range of pastries and cakes.

Badger & Dodo is a complete contrast to Coffeewerk + Press, the other Galway speciality coffee shop I managed to visit. Whereas Coffeewerk is spread over three floors of a glorious old building, Badger & Dodo occupies the corner of a very modern block, a strange, L-shaped spot with the top of the L sliced off at an angle of 30⁰. The left-hand side and bottom of the L are all floor-to-ceiling glass, making it a very bright space, even on a cloudy day.  With its south-facing aspect, when the sun does come out (in my experience, a rare occurrence in Galway!) the interior is flooded with sunlight. It’s so bright that I’m surprised the baristas don’t wear shades!

The door is at the bottom of the L, with a small, low, four-person window-bar to the right. Another, higher, window-bar runs around the remaining windows to the left of the door and then all along the left-hand side of the L, seating eight in all.  The counter is right at the back, at the top of the L, parallel with the back wall, which means that it’s at the same 30⁰ angle to the main space. The only other seating is a six-seat communal table which occupies the middle of the room between the door and counter.

Badger & Dodo roasts all its own coffee, and while it roasts espresso blends for its wholesale customers, it only serves single-origins in the café, one each on espresso (a Brazilian Beneficio Presente during my visit) and filter (Colombia El Desvelado #6).

I began with a flat white at the recommendation of Brian, who joined Badger & Dodo shortly after the café opened and worked his way up to become manager. This was pleasant enough, although in its defence, it was my first coffee of the day and my taste buds hadn’t quite warmed up. The fruity notes of the coffee came through the milk well enough, but I always felt that they were slightly clashing with the sweetness of the milk, rather than complimenting it.

I was very tempted by Badger & Dodo’s single-origin tasting boards. You can have the espresso single-origin three ways (espresso, macchiato and V60) or you can try both the espresso and filter single-origins through the V60. I was seriously considering the three-way option, but it would have left me dangerously over-caffeinated.

Instead, Brian convinced me that I would be better off with a V60 of the filter (the other options are Aeropress and, if you’re sharing, a Chemex). This was a Colombia El Desvelado #6, which, Brian explained, was the first coffee Badger & Dodo had sourced from Nordic Approach.

My coffee was served, as it should be, in a carafe, with a cup on the side, all beautifully presented on a wooden tray. The coffee was an amazing colour, almost like red wine, but it was quite a subtle in taste, holding its own as it cooled.

If you’re hungry, Badger & Dodo has a selection of nine pre-made sandwiches or you can make your own from a wide range of ingredients. Since it was lunchtime and I had a 2½ hour coach ride ahead of me, I decide to have the goats cheese toasty, which was lovely and filling, with some very crunchy toast.