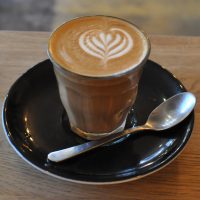 Hoxton North started life in October 2013 on Parliament Street in Harrogate. I did try to visit back in 2014, when I was in Harrogate to see the likes of Bean & Bud, but I foolishly came on a Monday and, back then, Parliament Street had Mondays off. By the time I returned to Harrogate at the end of last year, there were two Hoxton Norths with this, the second branch, having opened in October 2016, just around the corner on Royal Parade. For a while the two branches operated in tandem, but in March this year, the original on Parliament Street closed, leaving Royal Parade as Hoxton North’s sole outpost for now.

In comparison to Parliament Street, where the focus was firmly on the coffee, Royal Parade has spread its wings a little, offering extensive breakfast and brunch menus, plus wine and beer in the evenings. The two spaces are very different as well, Royal Parade offering a larger, bright, open space, lacking Parliament Street’s cosy little nooks and crannies. When it comes to the coffee, there’s a house-espresso blend (Resolute during my visit), with decaf on the second grinder (a San Fermin from Colombia), both from Cornwall’s Origin.

Hoxton North is on the western side of a large roundabout, just to the west of Harrogate’s compact centre, where it catches the morning sun. On the corner of Royal Parade and Back Royal Parade, it has windows on two sides, making for a very bright space, aided by a simple, open, uncluttered interior. If you like, you can sit outside at a row of tables on the pavement, where you get great views of the roundabout (which is far prettier than that sentence makes it sound!).

The front of Hoxton North is largely made of glass, with a large, three-paned, wooden-framed window taking up much of the space, a wooden-framed glass door tucked away on the right. Inside, the layout is simple, with the counter at the back on the left-hand side, the kitchen behind that through a door in the back wall.

The remaining space is given over to the seating, with four square, two-person tables occupying the centre of the room. To the right, the white-tiled wall has a padded bench towards the back, with two high, thin tables in front of it. Opposite that, there’s a large window at the front on the left-hand side, with the counter at the back. The window is occupied by a padded bench seat, with a more conventional table in front of it.

Finally, there’s a six-person window-bar, with bar stools, occupying the full width of the window at the front. This provides similarly excellent views when compared to the outside tables, but with the added benefit of being sheltered from the traffic.

While the original Hoxton North was very much a coffee shop, with pour-overs and multiple roasters, the focus at Royal Parade is much broader, with an excellent range of food on offer until three o’clock (I arrived at three thirty, timing never having been my strong suit), plus there’s cake all day. In keeping with this, the service is much more table-orientated, so take a seat and the staff will bring you a menu and a carafe of water. They’re also very friendly and will come and talk with you given half a chance!

It’s espresso only at Royal Parade, although there’s also tea from Brew Tea Co if that takes your fancy. The other area where Royal Parade differs from its predecessor on Parliament Street is the hours it keeps, staying open until nine o’clock in the evening on weekdays (eleven o’clock from Thursday to Saturday), when it morphs into more of a bar, with the draught beer and wine coming into their own.

I was there one Sunday afternoon in the winter, so missed all this, settling instead for a piccolo, made with Origin’s seasonal Resolute blend, which, while I was there, was a combination of beans from Nicaragua and El Salvador. The coffee, with hints of milk chocolate, went very well with the rich and creamy milk, the piccolo offering just the right ratio of coffee to milk to allow both components to shine.