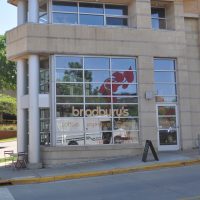 When arriving in a new city, one of the first things I do, on finding a good coffee shop, is ask where else is good. When I tried this in Madison in July, one place got consistent recommendations, particularly from 5th Element Coffee. That was Bradbury’s Coffee, which, for the last five years, has been serving coffee from a variety of roasters from its home, a block from Madison’s Capitol Building in the heart of the city.

It’s an interesting space, at the tip of an interesting building. Triangular, with the counter at the back and the seating in the centre as well as around the edges, Bradbury’s has windows all around, with the exception of the back wall. These reach all the way to the unfeasibly high ceiling, the coffee shop effectively occupying a double-height space.

Although there’s a bespoke house-blend from Kickapoo Coffee, Bradbury’s employs a rotating array of guest roasters through espresso, pour-over (Kalita Wave) and bulk-brew. There’s also a cafetiere option. All the coffee, along with other offerings from the featured roasters, is for sale. Finally, there’s a range of sweet and savoury crepes, freshly made to order on a pair of griddles behind the counter.

Bradbury’s Coffee occupies the tip of a building at the intersection of North Hamilton and North Webster Streets, which slope steeply down from the Capitol Building. The building ends with a pair of tall pillars, separated by a narrow window, leaving room for a solitary outside table at the surprisingly quiet intersection.

The door is at the back on the left-hand side on North Hamilton. This leads you directly to the counter which runs almost the full width of the back of the Bradbury’s. There’s just enough room for the till, which is followed by the espresso machine, a two-group Synesso. Space is at a premium, so everything is beautifully fitted in. There’s a bulk-brewer and boiler for the pour-overs directly behind the till and a small kitchen area behind and to the left of the espresso machine where the sweet and savoury crepes are prepared.

The layout is a little confusing until you know where everything is. However, the basics are that the menu is on a board along the window directly ahead of you on the other side of the counter, while, to your right, chalked up on the wall by the counter’s edge, is the current choice of beans. Once you’ve ordered, take a seat and your coffee will be brought to you, which is how it should be.

Talking of seats, there’s a low, L-shaped table with low stools in the centre of the room, which, if everyone squeezes in, will seat 12. Alternatively, find yourself a place at one of the window-bars which line the rest of Bradbury’s. There’s room for four people down each side, while you can fit two more at the point of the triangle. Finally, there’s a three-person square table against the far window between the end of the window-bar and the fridge which is at the end of the counter.

The high ceiling and multiple windows make it a very bright and spacious spot, although it can be very busy and, when it is, it can also be very, very noisy, with a plenty of people coming in for crepes. Talking of which, for somewhere so small, Bradbury’s offers a lot. It’s not just the crepes, though, since there’s a retail offering, plus pour-over and a choice of beans on espresso, all of which I’d expect in a much larger space than this.

I decided to skip the bespoke house-blend from Kickapoo Coffee and went straight to the guest espresso (known as the featured espresso). This, a Colombian single-origin, was from Camber Coffee in Washington State, while the pour-over, a Kenyan, was also from Camber. Finally, a third single-origin, a Costa Rican, from Wisconsin-based Ruby Coffee Roasters, was available on bulk-brew (this tends to change daily).

I started off with the featured espresso as a flat white, with some fascinating flavours coming through the milk. This intrigued me enough that I ordered it as an espresso. Served with a glass of sparkling water, I found it far too bright for me on the first sip, although it mellowed on the second sip, allowing the intriguing flavour that I had experienced in the flat white to come to the fore. On the third sip, it was even mellower and much more rounded. Good things, I suppose, come to those who wait!

September 2017: I popped back the day after I published this to try out the savoury crepes for lunch, enjoying a rather lovely basil pesto, mozzarella and scrambled egg buckwheat crepe. The crepe was thin and crispy, while the filling was very generous. I followed this up with a single-origin Kiangol Kenyan pour-over from Ruby.