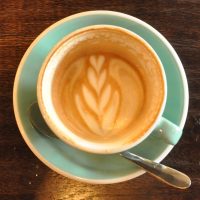 At the eastern end of Cardiff’s busy Queen Street, near Queen Street station, you’ll find, in amongst the host of typical High Street names, the latest branch of Nottingham-powerhouse, 200 Degrees. The site has a chequered history, once housing one of two branches of Artigiano Espresso in the city (both are now gone). In contrast to Artigiano, with its soaring entrance way, open all the way to the double-height ceiling, complete with mezzanine level at the back, 200 Degrees occupies a long, narrow, low shop. The upstairs is still there, converted in part to the 200 Degrees barista school, but the shop itself feels so different that I had to do a double take. The sweeping staircase that once graced the left-hand wall is gone, replaced by a low ceiling that gives 200 Degrees a look not dissimilar to its Birmingham branch, albeit a narrower, lower-ceilinged one.

There is a pair of central, recessed doors, flanked by windows on either side, each of which has a handful of tables outside on the broad pavement, partly sheltered by a transparent awning which projects from the building. Inside there is seating in either window, with a pair of armchairs to the left and a small table to the right, tucked away almost behind the door in the gap between the window and the counter, which takes its standard place on the right-hand side, running maybe two-thirds of the length of the building.

Meanwhile the middle and left-hand sides are given over to seating. There’s a row of six two-person tables with comfortable chairs down the centre, separated by three narrow pillars which double as retail shelves. A row of four tables runs along the exposed brick of the left-hand wall before giving way to a long, padding bench with 11 two-person tables which runs almost to the back. Meanwhile, on the right, there’s a wood-panelled partition after the counter, then a low communal table and, along the exposed brick of the right-hand wall, a bar with six high-backed chairs and a mirror, followed by another low communal table. A row of three four-person tables runs parallel with the bar, while on the left, at the back, is the customary neon fireplace with a cluster of armchairs around it.

An opening in the back wall leads to a flight of stairs that leads to the toilets upstairs. Beyond this is a windowless room, occupying the back of the old mezzanine level, which hosts 200 Degrees’ barista school. Back downstairs, the windows at the front make this a bright spot, but it quickly gives way to more subdued lighting at the back, despite numerous light bulbs. Someone commented that he’d never seen anywhere with so many lights, but with so little light!

It was the end of a long day spent trekking around the coffee shops of Cardiff and since I’d recently sampled the guest espresso (at the Carrington Street branch in Nottingham and in Leicester), I decided to go for the Mellowship Slinky Decaf as a flat white, a lovely, smooth, creamy cup of coffee, just what I was looking for to round off a busy trip. I paired this with an excellent warm fruit scone, smothered with butter and jam, to help soak up the last of the caffeine from other stops.

If you enjoyed this Coffee Spot, then take a look at the rest of Cardiff’s speciality coffee scene with the Coffee Spot Guide to Cardiff.