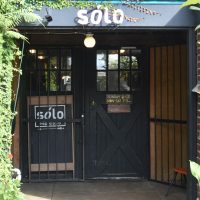 Doing my research before my short trip to New Orleans, not many names came up when I asked about speciality coffee. However, of those that did, the most prevalent was Sólo Espresso, which was also highly recommended on the ground. The first thing to say is that if you stick to the usual tourist areas, you’re not going to come across Sólo. It’s east of the French Quarter, on the border between Bywater and St. Claude, and across the canal from the Lower Ninth Ward.

However, as I always say, good coffee’s worth travelling for. In this case, you have several options, including a fairly pleasant 50-minute stroll through Crescent Park on the north bank of the Mississippi. There’s also a couple of buses or a 10-minute taxi ride, depending on traffic.

Whichever route you take, you won’t be disappointed. Occupying the ground floor of a long, low building, there’s something of the basement about Sólo. The coffee, meanwhile, comes from old friends, Miami’s Panther Coffee, with the East Coast blend on espresso, where it’s joined by a guest single-origin, plus decaf. There’s also bulk-brew, cold-brew or pour-over using the Chemex. If you’re hungry, there’s a breakfast/lunch menu, plus cake.

October 2020: it looks as if Sólo Espresso didn’t make it through the COVID-19 pandemic and has been forced to close for good.

October 2021: the good news is that Sólo Espresso has a spiritual successor, Lowpoint, which has taken over the space. You can see what I made of it when I visited in November 2022.

Sólo Espresso is right on the corner of Poland Avenue and Urquhart Street, the entrance tucked away under/to the right of the stairs that lead up to Raus Haus, the building’s main tenants. The stairway forms the left-hand side of what is in effect a long path leading to Sólo’s doors, while the right-hand side is demarcated by some planters and a pair of wide bench seats. The entrance itself, wide, wooden double doors, is set back under a porch-like structure, providing further seating, a pair of chairs in a sheltered nook off to the left.

Stepping inside, you find yourself in a long, low basement-like space which stretches away ahead of you. There’s some seating in the front third by the doors, then comes the counter, which occupies another third of the space, followed by more seating at the back. Immediately to the right of the door is a south-facing four-person window-bar with high-chairs, while to the door’s left, there’s a wooden bench-seat built into the corner.

Next comes the counter, a long affair running along the right-hand wall, the short end facing the doors. Here you’ll find the till and the cake, while the menu is on the wall to the right. There’s an open area around the corner where you can watch the pour-overs being made, then comes the Synesso espresso machine and its three grinders (house, single-origin guest and decaf), before another long, open area, behind which is the open kitchen. Best of all, there are six square stools lining the counter, where you can sit and watch your coffee/breakfast/lunch being made.

The space at the back is dominated by a large, old wooden communal table with a bench down one side, low stools down the other. Finally there’s a second bar, this time up against the left-hand wall, with three low stools.

Unfortunately I failed to pay attention to opening times, not noticing that Sólo closes at three o’clock, instead arriving at 2.50… Fortunately, the barista, Charles, and his colleague, were very obliging, and other than missing the kitchen and its tempting-looking breakfast/lunch menu, which closed at two o’clock, everything else was at my disposal.

There was a common theme to all the places that I visited in New Orleans. While there’s a small and thriving speciality coffee shop scene, there’s no real roasting to speak of, with coffee from all over, including the Midwest, Pacific Northwest and Florida. In the case of Sólo, Miami’s Panther Coffee fills the role of house-roaster, with the ever-reliable East Coast blend in the main grinder. As much as I like the East Coast blend, I’d not come all the way to New Orleans to try it. Unfortunately the guest espresso (which changes on a weekly basis), a Peruvian single-origin from Washington State’s Camber Coffee, was still resting and I wasn’t ready to switch to decaf, which is either from Roseline (Portland, Oregon) or Wisconsin’s Ruby Coffee Roasters.

Instead I turned to pour-over, which also rotates every week or so. During my visit, there was a naturally-processed single-origin from Taypiplaya, Bolivia, roasted by Panther. I don’t see Bolivian coffee that often, so I jumped at the chance. It was a lovely rich coffee, with plenty of body, which nicely held its own as it cooled. Well worth a 50-minute walk!