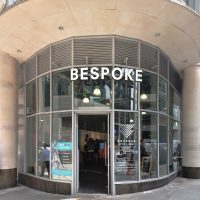 The association between coffee and cycling is a long and honourable one. V69 is one such example, having opened in 2016, part of the growing speciality coffee scene in the City of London. It occupies a large counter with a limited amount of seating just inside the door of the Bespoke Cycling shop on Gresham Street, between St Mary-le-Bow church and the Guildhall. If you don’t want to go inside, there’s also a takeaway window that opens directly onto the street.

The coffee is from Margate’s Curve Coffee Roasters and London’s Workshop, plus occasional guests, with a range of single-origins on espresso (one each) and pour-over through the V60. There’s also a daily option on batch-brew through the Moccamaster. The milk, meanwhile, is from Estate Dairy, with non-dairy alternatives in the shape of oat, soy and almond milks. If you’re hungry, there’s a breakfast menu, plus a selection of cakes.

Although V69/Bespoke Cycling’s address is Gresham Street, the actual shop is in a tangle of narrow streets between Gresham Street (to the north) and Cheapside (to the south), with the door on the corner of Milk Street and Russian Row. While the building and those around it are very modern, the actual street plan is very old, typical of the short, narrow streets of the City of London.

Bespoke Cycling occupies a long, narrow, high-ceilinged space. The short end is a curved glass affair between two concrete pillars, where the door faces onto Milk Street, while the long side, made up of entirely of tall, multi-paned windows, runs down Russian Row. If all you want is takeaway coffee, then you can simply go up to the large hatch about half way down the Russia Row side, where you can order, pay for and collect your coffee without ever setting foot inside.

Alternatively, if you are staying for a bit, head around to the door on the corner. Stepping inside, you’ll find a two-person window-bar tucked away on the right, followed immediately by a long, thin counter along the right-hand side. This occupies maybe one quarter of the length of Bespoke Cycles, which has the remaining three quarters of the store. Right at the back (of the cycling part of the store) is a full mezzanine level, which gives you an idea of how high the ceiling is.

The short part of the counter, facing towards the door, holds the cakes, while the rest of the counter, a long, thin affair, runs away towards the back of Bespoke Cycling and has four bar stools along the front part, where you can watch the baristas at work. The menu is on the wall (which is in fact a window) opposite the bar stools, with the pour-over and batch-brew area below it. Meanwhile, off to the left is the takeaway hatch, where you’ll find the espresso machine, a two-group La Marzocco Linea.

Although the bulk of the coffee is from Curve and Workshop, there’s also a guest roaster which was April, from Copenhagen, during my visit. I’d just come from the Lazy Coffee Cart, where I’d had a flat white, so I decided to try the batch-brew, which I enjoyed while sitting at the counter, chatting with Marius, the owner of V69, in between serving customers. My coffee, a washed Kayon Mountain from Ethiopia and roasted by Curve, was a smooth and clean coffee, with hints of fruit that came to the fore as it cooled. I lingered long enough that the last remnants of my coffee were cold by the time I’d finished, at which point it was very fine indeed.