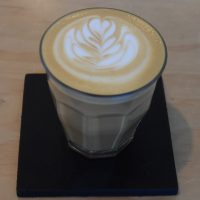 BLK \ MRKT is one of nine businesses operating inside Warehouse MRKT, which is on the corner of Hall and Garland Streets. Each business, which are either cafés or what I’d all arts and crafts shops, occupies its own semi-open, interconnected space, linked by a central corridor. There are several entrances, including an East Entrance from the (staff) parking lot and a North Entrance on Garland Street, but the best option is the West Entrance on Hall Street, which pitches you up right next to the BLK \ MRKT.

There’s a large, outdoor seating area which catches the afternoon sun. Raised and set back from the pavement, this runs along the front of BLK \ MRKT, with three two-person tables and a pair of benches, although you’ll have to go inside to order and collect your coffee. The door is to your left, which leads into the central corridor, with BLK \ MRKT on the right, where you’ll find what is in effect a large, glass wall with an inset door.

This deposits you at the back of BLK \ MRKT, a long, thin space stretching off to your left, occupied by the retail section, while is BLK \ MRKT itself is to the right. This is a semi-open space with a sliding doorway in middle of the right-hand wall which leads to another store. Windows line the front, which, coupled with the glass wall on the left, makes it a very bright space.

BLK \ MRKT has a simple layout. The counter is at back, with the till on the left-hand side, facing the door, while the counter itself runs along the back wall, not quite parallel to the front, sloping back from left-to-right by maybe 15⁰.  The counter is dominated by the gorgeous Kees van der Westen Spirit espresso machine and its solitary grinder, with the space to the right left open for counter seating, provided by four broad-topped stools.

The roaster is against the right-hand wall, next to the sliding door, with the remaining seating arranged along the front and left-hand wall, a central communal table rounding things off. This narrow, six-person table, again with stools, is parallel to the window, so is slightly offset from the counter. A long window, with a four-person window-bar, runs the almost the full width of BLK \ MRKT. This ends just before a large square window in the front wall, while a bench, with four two-person tables, lines the left-hand wall, starting at the window and running all the way to the door.

BLK \ MRKT has a simple menu: espresso, espresso with milk or batch-brew. I ordered espresso with milk, and was offered a cappuccino, cortado or latte, so I asked for whatever showed off the coffee the best. I think, judging by the size, that I got a small cappuccino, but it could have been a large cortado. Either way, served in a glass, it was the perfect ratio of milk to coffee, enough to let the flavour of Parlor Coffee’s Prospect blend come through, while the milk’s sweetness counteracted any bitterness.

I followed that with a Guatemalan single-origin, that day’s batch-brew option. Very smooth and drinkable, it matured towards the end of the cup. I also had a very tasty savoury turnover, plus I took a hand pie away with me. This is usually cherry, but that day was blueberry. Either way, it made for a very tasty breakfast the following day!