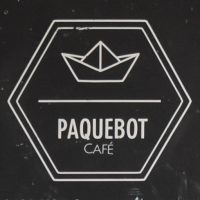 On the northern edge of Vieux Montréal (old Montréal), Paquebot sits on Boulevard Saint Laurent. Although the name’s clearly written on the middle of three large windows, it’s fairly easy to miss unless you’re paying attention, partly because access is via a shared doorway to the right. This lets you into a small lobby area, the door to Paquebot on your left.

The shop is long and thin, with extremely high ceilings. The aforementioned windows stretch Paquebot’s full width, not quite reaching from floor to ceiling. The counter runs the length of the left-hand wall, while the door’s a little way down on the right, handily opening opposite the till. Meanwhile, a long flight of steps, starting just to your right as you enter, leads up to a mezzanine at the back, where you’ll find the majority of the seating. In this respect, the layout instantly reminded me of Plenty Café in Rittenhouse, Philadelphia. It also helped that the owner, Yannik, was coincidentally wearing a shirt with “Plenty” written on it when I first visited on Saturday…

There’s not much in the way of seating downstairs. A short bench sits under the window at the front while, at the back, there’s a short extension to the counter with a couple of stools. Finally, tucked away almost invisibly under the stairs, opposite the stools, is another longer, broader, bench. Right at the back, under the mezzanine itself, is the kitchen, toilet and some storerooms.

The counter’s a pretty simple affair, with beer taps on the left, dispensing café lemonade, nitro cold brew and kombucha, exactly as at Paquebot Mont-Royal. Next comes the cake, till, and a pair of Mythos One grinders, along with a matt black La Marzocco Linea espresso machine. The batch-brew is behind the counter, along with a long line of vinyl records which are played, once again just like Paquebot Mont-Royal, on the turntable by the window. There’s also a small bookshelf.

The stairs, which run along the right-hand wall, enter at the front of the mezzanine, where a narrow, four-person bar with stools runs the width of the mezzanine, overlooking the counter below. Broad, wooden box-benches run around the three walls of the mezzanine, with two raised sections, one in each corner. There’s also a low coffee table in the middle of the floor. The walls are tiled, while the ceiling has rows of beams running left-to-right, interspersed with lightbulbs since there’s very little natural light up here.

All the coffee is from Zab, a roastery started in 2016 by a friend of Paquebot’s owners. Recently the two businesses have merged, although they retain their separate identities. Visiting multiple times, I sampled a range coffees, starting with my first visit on Saturday, when I had the Waykan, a Guatemalan single-origin. I’d enjoyed this in my flat white at Paquebot Mont-Royal that morning, so tried it as an espresso and finally as the batch-brew when I returned on Monday.

I enjoyed the espresso, although I preferred it in milk. However, as a filter, it was excellent, very smooth, but with plenty of body and subtle flavours. When I popped back the following Sunday, I tried the Los Naranjos Colombian as an espresso, a lovely, well-balanced coffee with a touch of acidity. It went well in milk too, my friend having a latte which was rich and creamy, the coffee holding its own with the milk.

I also had a very fine cheese toastie for lunch on Monday. Made with slices of apple and lovely and crunchy toast, it was the perfect light lunch and just what I needed.

December 2018: Paquebot Vieux-Montréal was a runner-up for the 2018 Best Physical Space Award.