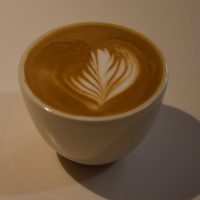 I really struck lucky with my apartment in Montréal. Not only handy for the office and a ten-minute walk from Paquebot Mont-Royal (Café Plume as was), it was, as I discovered, just a few minutes’ walk from both Dispatch Coffee and, along Rue Rachel, Café Névé, two very disparate coffee shops.

On the corner of Boulevard Saint Laurent and Avenue Duluth, Dispatch Coffee’s one of many buildings in the neighbourhood decorated (on the Duluth side) with an amazing mural. Inside, it’s clean, modern and austere, with concrete walls and floors, softened a little by light wood panelling, which matches the furniture. It’s almost square, being slightly deeper than it is wide, with the door on the corner, at 45⁰. There are floor-to-ceiling windows along the front, facing the busy Boulevard Saint Laurent, while another, much shorter floor-to-ceiling window to the left adds to the sense of light and space. This natural light is supplemented by fluorescent strip lights and occasional spotlights embedded in the ceiling.

Dispatch is split into two, with the massive island counter, a clean, white, clinical affair, occupying three quarters of the space. It runs from front to back, acting as both showroom at the elegant curved front, which faces Boulevard Saint Laurent, and coffee shop counter down the sides. A podium counter in the centre holds the batch-brew plus EK-43 grinder, while another has the sink.

On entering, you’re naturally led to the counter, retail coffee bags on the corner. Next comes a generous display case with the pastries, granola, salads and soft drinks, followed by the till and serving area. Then there’s a hot water boiler, the Mythos 1 grinder and a custom La Marzocco Linea with a curved case and transparent end panels. It looks beautiful, but the curved top makes it impossible to store anything there, which is typically where you find the cups. Instead the baristas have to reach down under the counter for them. If you turn right when you reach the counter, you find, past the retail bags, merchandising, and then various coffee-making equipment laid out much as you would see it in a high-end store. There are various filter methods, grinders, scales, kettles and, at the far end, a Sage home espresso machine.

There’s limited seating around the counter. A long bench occupies the first window to the right of the door, while there is a shorter one in the window to the left, followed by a third bench against the wall, opposite the till. The bulk of the seating is on the right, where a raised concrete platform less than a metre high runs along the right-had wall. Access is via a shallow ramp at the front or three broad steps at the back. A single concrete step, which serves as a long bench, runs between the two, facing the right-hand side of the counter. The platform holds two tables, front and back, seating four on long benches, with in-built power sockets under the table. Between them, a C-shaped bench with a low coffee table faces out across Dispatch.

I visited twice one in the morning for a Cortado, served in a lovely, small, ceramic bowl and made with the La Union from Colombia. The perfect ratio of coffee to milk, it resulted in a strong, biscuity coffee. The only slight issue I had was that the bowl is hot to the touch, but otherwise is beautiful to look at and (once it’s cooled down a bit) hold. I returned the next evening for a decaf cappuccino, another fine coffee, this time served in a broad, cylindrical mug.