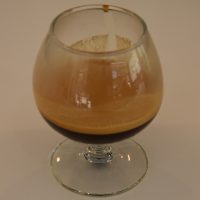 Today’s Coffee Spot celebrates the publication of Sprudge’s A Coffee Drinker’s Guide to Grand Rapids, written by friend of the Coffee Spot, The Pourover. Taking you back to a glorious, sunny, hot (29°C) Sunday last September, the day I visited Grand Rapids on my Midwest Road Trip, let me present my own modest contribution, Madcap’s Fulton Street branch, attached to its roastery in suburban eastern Grand Rapids.

The roastery moved here from the basement of the original Monroe Center location in 2015, with the coffee shop opening in March 2018. Occupying an old garage set back from the street, there’s a broad forecourt, with seating out front. The roastery and training room, open by appointment only, is to the left, while the standalone coffee shop is to right.

A smaller, more relaxed operation than the flagship store downtown, the coffee offering’s similar, with two options on espresso (a blend and single-origin), four on pour-over (one blend, three single-origins) and four on batch-brew (six at the weekend). Various drinks are on tap, including nitro and cold brew, plus there’s tea and seasonal drinks. Naturally, the entire output is available in retail bags, with a small selection of cake if you’re hungry.

Madcap occupies a long, low, single-storey white-painted building on the northern side of Fulton Street at its corner with Caroline Place. The roastery/training room has a separate entrance on the left, while the coffee shop occupies the right-hand two thirds, the door at the left-hand end of the space.

Smaller than the flagship Monroe Center location, Fulton Street has more outside seating, making full use of the old garage forecourt. There are three four-person tables in front of the coffee shop, a cluster of four armchairs on the corner and a further four-person table down the right-hand side. This layout is mirrored by the windows, with tall windows on the left, followed by a glass rollup door on the right. Finally, along the right-hand side, are more windows, making the interior really bright, sunlight flooding in all day long due to its south-facing aspect, although the projecting, flat awning at the front provides some respite from the sun.

Inside and out, a black and white colour scheme dominates, offset by a red concrete floor. The door is inset into the windows on the left-hand side, with a two-seat window-bar to the left, and a five-seat window-bar to the right, seating provided by narrowly-spaced, fixed-height black stools bolted to the floor. The counter is on the back wall and, starting on the left, occupies maybe two-thirds of its width. You can sit here on more of the black stools, a wide, white-topped projection allowing you to get your knees under the counter-top. In all, there are six stools along the front, three more down the right-hand side.

The remaining seating is around the edges, with a single two-person table to the right of window-bar, followed by a long, padded black bench running under the two windows at the side and a little way around the back wall. There are seven two-person tables along the right-hand side and one along the back wall, all with wire-backed chairs. Finally, there’s a standing-only table/bar in the centre between the windows and the counter, which also has takeaway lids and a water station at the far end.

The till is directly opposite the door, with a small pair of shelves on the counter-front, filled with retail bags. The menu is on the wall behind the counter, with the coffee choices on a printed menu that you can pick up and read at your leisure. The rest of the counter is given over to coffee-making, starting with the nitro taps, followed by the pour-over section. In contrast to the Seraphim Brewers at Monroe Centre, Fulton Street has a pair of Modbar pour-over modules, while at the right-hand end, there’s a La Marzocco Linea, which, along with its two grinders, faces the right-hand wall.

Madcap changes things up on a regular basis, with a different second option on espresso every day or so, while the pour-over choices change every few days. During my visit, there were an interesting pair of micro-lots exclusive to Madcap from the same farm in El Salvador. The first was a naturally-occurring varietal found by the farmer, while the second was from trees seeded from the original.

Both were available as pour-over, with the original on as the second espresso, so I decided to have that. I started by tried it as a pour-over, served in a lovely ceramic mug, followed by the espresso, served in a snifter glass. As a pour-over, it was a very fine, rich, fruity coffee, while as an espresso, it was very different, the acidity accentuated over the fruitiness, but with much of the same underlying taste.

You can see what I made of the other Madcap locations in Grand Rapids, Monroe Center and Downtown Market, while for more on the Grand Rapids coffee scene, check out Sprudge’s Coffee Drinker’s Guide.