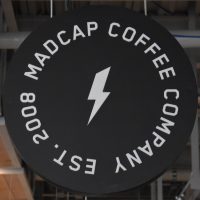 Madcap Coffee is, other than Chicago’s Intelligentsia, the one name in Midwest coffee that I hear (and see) on a consistent basis around the US. Based in Grand Rapids, Michigan, which I visited on last year’s Midwest road trip specifically to see Madcap and visit its three locations: Monroe Center, where it all began, the new roastery and coffee shop on Fulton Street, and the subject of today’s Coffee Spot, Madcap’s coffee bar in Downtown Market.

All three locations have the same basic menu, with two options on espresso and multiple pour-over options, although the choice of beans varies. For Downtown Market, this means that the Third Coast blend, along with decaf, are ever-present on espresso, joined by a second option which changes once or twice a week. For coffee equipment geeks, the shots are pulled on a Modbar system, with Modbar pour-over modules dispensing filter coffee through the Kalita Wave.

Madcap Coffee, which opened in early 2018, is part of Grand Rapid’s Downtown Market, a large, indoor market on Ionia Avenue. About 20 minutes’ walk south of Monroe Center, it’s on the opposite side of US 131 from the Amtrak station. Downtown Market is a collection of over 20 artisan food shops, stalls and restaurants, with Madcap at the building’s northern end, facing the open-air parking lot.

Entering through the main doors from the parking lot, Madcap is on your left, with Love’s Ice Cream & Chocolate straight ahead. There’s also a large, outdoor seating area to the left of the door, with three square, four-person tables, partly sheltered under the projecting roof. Behind the outdoor seating area, Madcap Coffee is clearly visible through the floor-to-ceiling windows.

Inside, Madcap occupies a circular island counter, with seating around the edges, occupying maybe 210° of the counter. The till is in the centre, facing you as you approach from the doors, while the seating, provided by fixed bar stools, is split between left (nine stools) and right (12 stools). At the far left-hand end, against a wall by the window, there’s a set of retail shelves. Although the layout is different, in concept it reminded me of George Howell in the Boston Public Market.

Of the three Madcap locations in Grand Rapids, this is, perhaps, the one where you get closest to the coffee, which is arrayed around the counter. To the left are two Modbar pour-over modules, along with their Mahlkönig EK43 grinder, while to the right are a pair of Modbar group heads and steam wands, along with two grinders (a Victoria Arduino Mythos 1 and a Mahlkönig Peak).

During my visit, Madcap had its Ocktoberfest on the second grinder for espresso, which was also on pour-over, along with Reko, an Ethiopian single-origin, and two El Salvador single-origins from the same farm, which I’d tried earlier in the day at Fulton Street. By this point, I was rather over-caffeinated, so I ordered a decaf cortado, which was served with a glass of sparkling water.

Made with a Colombian single-origin decaf, it was a lovely, smooth coffee with some excellent latte art. Compared to the cortado made with the Third Coast blend that I’d had early that day at the Monroe Center, the coffee didn’t come through the milk as strongly, resulting in a smoother, more rounded coffee which I really enjoyed.