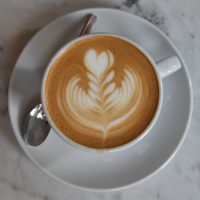 The Pilgrm is a small, boutique hotel almost directly opposite the front of Paddington station which just happens to have a speciality coffee counter in the lobby downstairs, run by Workshop. If that’s all there was to it, it would be pretty awesome, but there’s more. The Pilgrm also has an upstairs lounge and terrace, which, while catering primarily to hotel guests, is also open to the public, serving breakfast, lunch and, in the afternoon/evening, a range of small plates and drinks. And then there’s the coffee…

While the coffee counter works as a standalone operation, you can take your coffee and sit upstairs, or, alternative, sit upstairs, where there’s full table service, and order your coffee there, the barista bringing it up to you. Having spent most of my week in the Paddington area popping into Workshop for either an espresso or a flat white, usually on my way to the office, I decided I had to try the lounge, popping by on Friday afternoon for coffee and returning on Saturday morning for breakfast.

Occupying an old townhouse on the eastern side of London Street, The Pilgrm has a modest street level entrance, sandwiched between a pub and restaurant, although the hotel proper rises up the full four floors above, stretching the full width of all three businesses. Access is up a short flight of steps to a recessed door on the left, which deposits you in a beautiful-appointed lobby, the Workshop coffee counter off to the right.

Although there are lifts down the left-hand side, the best route to the first-floor lounge is up the magnificent 300 year-old staircase which is ahead of you on your right. Running across the back wall above the coffee counter, this doubles back on itself, depositing you at back of the smaller of what turns out to be two lounges. This has a row of three booth-like four-person tables along the front and, to the right of the stairs, a pair of comfortable armchairs.

A door to the right leads into the main lounge, a long, thin affair which runs along the front of The Pilgrm. There’s a counter at far end, with an open kitchen behind that, while along the front, two doors lead to the terrace. This runs the full width of The Pilgrm, with a narrow section to the left (where you enter) and slightly wider section at the back. This has enough room for a row of four-person tables, while the narrow section is only wide enough for two-person ones. Unlike many outdoor spaces in London, the terrace is refreshingly a smoke-free zone.

There’s plenty more seating in the main lounge. A long sofa runs the full width of the back wall, with normal height round tables at either end and low round tables in the middle. Additional seating is provided by nine armchairs running along the other side of the tables. Opposite them, at the front, each corner has a three-person table with armchairs, while between the doors to the terrace is another three-person table and a small sofa which faces two armchairs over a pair of low, round tables.

It’s full table service wherever you sit, although don’t be surprised if the staff ask you for your room number, particularly at breakfast. Talking of which, there’s an interesting brunch menu which is served from 07:30 to 15:00, with snacks and small plates on offer after that. There’s plenty of vegetarian and vegan options, as well as a couple of meaty dishes. I went for the vegan cooked breakfast, which was awesome, a fascinating blend of contrasting textures and flavours, with some hot ingredients, whereas others were cold. There were some Interesting twists on old standards too, such as beetroot falafel and butternut squash hummus. This was all served with a slice of excellent sourdough toast, which came on the side of the plate, rather than being piled high with food, something I always appreciate.

Naturally there was coffee. When I was visiting during the week, Workshop used a Nicaraguan single-origin, but when I returned on Friday afternoon, this had switched to a Colombian Los Naranjos. I had this on its own as an espresso, taking my coffee on the terrace, and in a flat white with my breakfast the following day. As much as I enjoyed the Nicaraguan, I found that the Colombian was even better, a slightly sweeter, more rounded coffee which went just as well in milk as it did on its own. Awesome.

2 thoughts on “Upstairs at The Pilgrm”