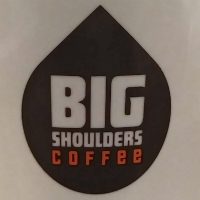 I first came across Big Shoulders a little over a year ago, when I spotted the Gold Coast branch, directly opposite Tempo Café, one of my favourite Chicago brunch spots. Although it had been around as a roaster since 2009, it was only recently that Big Shoulders had started opening its coffee shops. At the time of writing, Big Shoulders has seven locations, including today’s Coffee Spot, on West Lake Street in the Loop. I managed to visit it during the same trip that I discovered the Gold Coast coffee shop and returned when I was back in Chicago in May this year.

Big Shoulders roasts all the coffee, with a house blend, single-origin and decaf on espresso, served from a fairly concise menu, including cortado, flat white and cappuccino/latte options (the last two available in small and large). There’s a choice of filter options, with one single-origin on batch brew (“fast drip” on the menu) and another on pour-over (termed “slow coffee”, which I rather like), prepared using a V60 on the Modbar automated pour-over system. There are also cold brew and nitro options, plus a selection of tea and a range of breakfasts sandwiches and cakes if you’re hungry.

Big Shoulders is on West Lake Street, one block from the Chicago River in the northwest corner of The Loop. It’s just over five minutes’ walk from my office, making it feasible to pop out and back during an extended coffee break, although with the Infuse Coffee & Tea Bar in the lobby, laziness usually gets the better of me!

On the south side of the street, Big Shoulders shelters under the shadow of the ‘L’, Chicago’s elevated railway, on which the Pink and Green lines thunder by on their way to and from West Chicago. Big Shoulders presents a narrow façade onto the street, with the door on the right, and a tall, square window on the left.

The door from the street leads into an airlock-type arrangement (essential for Chicago’s freezing winters), with the entrance to the coffee shop via a glass door on the left, which deposits you at the front of Big Shoulders, next to the window. The coffee shop, long and thin, with wonderfully high ceilings (it’s as tall as it is wide) stretches off to your right, with the counter at the back and the seating (mostly) along the left-hand wall.

There’s a standing bar running the full width of the window, plus a single, low, triangular table with two low chairs against the right-hand wall, just next to the door. The bulk of the seating is along the left-hand wall, starting next to the window with a long, low table with five low stools. This is followed by an eight-person counter-like arrangement with high-backed bar-chairs, the counter-top projecting so you can get your knees under, complete with multiple power outlets. This starts flush with the wall, but slowly tapers out at an angle of around 20⁰ to the wall.

The L-shaped counter starts with a continuation of the seating counter, still running at about 20⁰ to the wall. This is the pour-over area, with the EK43 and Modbar, with the boiler and batch brewer against the wall behind it, above which is the menu. Next is the till and cake/sandwich display, with the orange La Marzocco Strada espresso machine and its grinders at the bottom of the L, which runs along the back wall.

On my first visit in 2018, I had the Ethiopian Limu, a washed coffee, as a pour-over, served in a diner-style mug, a lovely, smooth, sweet coffee. I returned a couple of times in 2019, the first time having another pour-over, this time served in carafe, with the cup on side, all presented on tray. This was a Burundi single origin, complex and subtle.

On my second visit, I had a shot of the house-blend (Lake Street), a smooth, well-balanced espresso, after which I got chatting with Skylar, my barista, who, it turns out, I had met when he was working at Matador in Flagstaff the previous year (he remembered me). What is it about Arizona baristas moving to Chicago?

Skylar was trying out a new Peruvian single-origin that was going on the Modbar the following day, and made me a (hand-made) pour-over which I had to go in my Therma Cup (since I was on my way to the airport to fly home). It was another lovely coffee, really fruity, but very smooth, the perfect send-off from Chicago.

You can see what fellow coffee blogger, Bex, made of Big Shoulders, which is in her guide, Nine Speciality Coffee Shops To Try in Chicago.

3 thoughts on “Big Shoulders, The Loop”