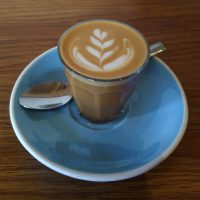 It feels harsh to call The Penny Drop an international chain, but that’s what you get for having two coffee shops, one in Melbourne and the other in London. Melbourne came first, opening as a pop-up in 2015, before finding a permanent home in 2016. A year later, the penny dropped in London, with the opening in June 2017 of a coffee shop on Tottenham Street, just off Tottenham Court Road. Technically this puts The Penny Drop in Fitzrovia, enhancing the area’s already excellent reputation for speciality coffee.

The two Penny Drops are very different, with Melbourne offering a 100-seat restaurant/coffee shop, while The Penny Drop in London occupies a small space which seats 20 at most, and that includes the benches outside. What’s more, it’s a throw-back to the sort of coffee shop that I remember in the capital 10 years ago, but which now seem increasingly rare. With coffee from a rotating cast of roasters, offering two options on espresso, another on batch brew and more on pour-over through the V60, all of which change every week or so, The Penny Drop is a genuine coffee shop, its food offering limited to a small selection of cakes and pastries.

The Penny Drop is on the south side of Tottenham Street, on the corner with Whitfield Street, and across the road from Whitfield Gardens and its iconic mural. The space is roughly square, with the door on the corner showing no favouritism, being at 45° to both streets. To either side are two large picture windows, while at the front (along Tottenham Street), a pair of long benches sit under the windows.

Separating these from counter at the back is a neat, free-standing bar, with a curved section at the far, left-hand end. Seating is provided by four three-legged stools, while the right-hand end of the bar, directly opposite the door, is kept free, although you could probably fit another couple of stools in there if you wanted to. The bar faces the counter, so is ideal for watching the baristas at work.

The last of the seating is at the back on the left, beyond the counter, where a six-person bar (with more three-legged stools) runs along the left-hand wall. Opposite the end of the bar, an opening to the right leads to a flight of stairs which heads tantalisingly down. However, rather than a secret basement, there’s just a storeroom and the toilet down there.

To business. The Penny Drop is a multi-roaster, with coffee from a rotating cast, including London’s Ground Coffee Society, Round Hill Roastery from Bath and, from slightly further afield, Edinburgh’s Obadiah Coffee and Red Bank from the Lake District. In the past, The Penny Drop has also reached out to roasters in Europe, such as Morgon Coffee Roasters (Gothenburg), but COVID-19 and Brexit has put that on hold for the moment.

There are always two options on espresso, with the aim of offering contrasting coffees, one of which goes well with milk, with the other being better on its own. When I was there, Margate’s Curve Coffee Roasters was in the first hopper, with its feature espresso, a naturally-processed Peruvian coffee from Maribel Herrera Torres. At the barista’s recommendation, I had this as an espresso, a lovely, sweet coffee with a pleasing touch of acidity.

I paired this with an equally lovely (and just as sweet) cinnamon bun. This was a million miles away from the sickly, sticky buns that you can get, structured more like a Danish pastry, with a subtle, cinnamon flavour.

I would have happily left things there, but the second espresso, the Los Vascos, a washed Colombian coffee, roasted by Kiss the Hippo, was in the process of being dialled-in. Completely out of the blue, a cortado appeared at my elbow, a thoughtful gift from the barista. This was very different, a complex coffee, with more subtle, fruity notes which worked really well in a cortado, where it more than held its own against the milk.

I was so impressed with my espresso that I bought a bag of the Maribel Herrera Torres to take home with me. I also needed something for pour-over, the barista instantly recommending the last bag of the Vunga, a washed coffee from Rwanda, roasted by Red Bank. This has proved to be something of a hit at home, going really nicely through my coffee sock.

3 thoughts on “The Penny Drop, London”