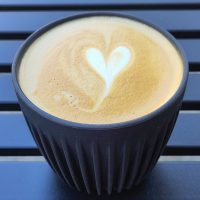 Réveille is a Bay Area café/roaster with five locations across San Francisco and another in Berkeley. I’m indebted to my friends Angela and Karen, who independently pointed me in the direction of Réveille. The subject of today’s Coffee Spot is Réveille Coffee Co. (the other locations go by the name Réveille Café) on Columbus Avenue in North Beach, an area with a rich (Italian) coffee culture, but one where speciality coffee is a bit thin on the ground, making Réveille a welcome addition.

Réveille occupies a wedge-shaped building on the corner where Kearny Street intersects Columbus Avenue at 45°, which is as much of a draw as the coffee. A bright, high-ceilinged space, the seating lines the windows down either side of the island counter, along with tables outside on the sloping Columbus Avenue/Kearny Street.

All the coffee is roasted on a Probat that sits in the middle of Réveille Café in Mission Bay. The standard espresso-based menu uses the seasonal Paradise Espresso and decaf, with a seasonal single-origin batch-brew filter. However, it’s disposable cups only, so don’t forget to bring your own. A kitchen at the back provides brunch, with a selection of cakes and pastries throughout the day.

I have a soft spot for North Beach, where I stayed on my first visit to San Francisco, way back in the pre-Coffee Spot days of 2005. Back then, I loved visiting the neighbourhood’s Italian cafés and patisseries (which are still going strong), although these days, my tastes in coffee have evolved, making Réveille Coffee Co. such a great find.

Located on Columbus Avenue, the main thoroughfare which runs northwest to southeast along the bottom of the valley that forms the heart of North Beach, Réveille is on the corner with Kearny Street. This runs north-south, conforming to the city’s grid pattern, intersecting Columbus Avenue at 45°. The result is an interesting wedge-shaped building (one of many along Columbus Avenue), with Réveille occupying the ground floor. However, in common with many San Francisco buildings, the streets slope so steeply that the kitchen, which is also on the ground floor at the back of Réveille, is actually over a metre above the floor of the coffee shop!

The door is at the apex of the wedge, looking across Columbus Avenue to the iconic Sentinel Building. A pair of two-person tables stand on the pavement a little way up Columbus Avenue, with a view of the even more iconic City Lights Bookstore which stands across the street. Meanwhile, on the other side of the building, five two/three-person tables run along next to the windows on Kearny Street, while opposite them is a stepped seating terrace on the side of the street. Not quite as involved as the one outside Linea Coffee Roasting, it provides an additional four benches.

There’s more seating inside, where Réveille stretches out ahead of you, widening as it goes back, both walls lined with tall windows. There’s a low bench in the first set of windows on either side of the door, while on the right you’ll find retail shelves stacked with bags of coffee. The island counter is ahead of you, set back from the door. You order here, where you’ll also find the menus and cakes/pastries displayed in a case under the counter, collecting your coffee to the left, past the La Marzocco Linea espresso machine.

The seating continues on either side of the counter, with a four-person window-bar in each of the two sets of windows down each side of Réveille, providing a total of 16 seats, eight on each side. Finally, at the back, there are two tables behind the counter, one on the left, the other under the kitchen to the right, each seating three.

I arrived late in the day, having lingered far too long at The Coffee Movement. By the time I reached Réveille, the kitchen had closed and there was a solitary pastry left in the display case, so it was just as well that I’d only come for coffee. Talking of which, Réveille roasts a small range of single-origins at its Mission Bay location, with its seasonal Paradise Espresso, currently the Costa Rica San Marcos De Tarrazú, joined by a seasonal decaf and a single-origin option on batch brew filter.

I kept things simple, ordering a cappuccino in my HuskeeCup, which was very smooth, milk and coffee in perfect harmony. I enjoyed this sitting outside on the corner, admiring the green turret of the Sentinel Building (also known as the Columbus Tower) on the other side of the intersection. Then, with the barista clearing up ahead of closing time, I was on my way again.