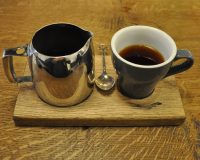 TAP became known as much for the bicycles which hung over the doors of its stores as for its name, which you really have to look for. The new branch, however, has dispensed with the bicycle, a new logo, which looks like a large cog, replacing it in the window. I’m not sure what it stands for, but then again, I never knew what the bicycle stood for either. That’s the beauty of branding!

The new branch also breaks the naming scheme that had served TAP so well, with each store known by its street number: No 26 (Rathbone Place), No 114 (Tottenham Court Road) and No 193 (Wardour Street). Instead, it’s known as Russell Square, occupying a large, open space midway along the square’s eastern side. Two large windows, each with a bench outside on the pavement, face towards the square, with the door at the left-hand end. Inside it’s easily the most spacious of all four branches, and surprisingly austere, particularly for a company that made its name with beautiful wooden furniture and warm, welcoming interiors.

Not that TAP’s dispensed with the wooden furniture, which is still present, and still bolted to the floor in traditional TAP fashion. However, it’s a very bare bones sort of place, with its concrete floor, plain, whitewashed walls and high, black ceiling, although it has far more charm than my description implies!

TAP’s always done things differently, with a clear separation of counters, one for ordering coffee, the other for making it. Here it’s taken to its logical extreme with a couple of long shelves on the left-hand wall containing cakes/pastries on top and sandwiches/salads down below. It’s help yourself, with plates if you’re staying in and boxes/bags if you’re leaving, while the till’s at the far end, below a cut-down drinks menu offering espresso (two options), espresso with milk (four options) and “other” (mocha, iced latte, cold brew and hot chocolate). There’s also a choice of three single-origin filters, with details on a separate card. This can be found by the till or on the tables, but you do have to know to look for it. You order here, paying for anything you’ve picked up from the cakes/sandwiches/salads. If you’re staying, you’re also given a playing card in a small milk bottle so that the staff can deliver your coffee.

There’s a large, imposing counter at the back, starting with a larger version of the pour-over options on a clipboard, followed by shelves of retail bags which partly obscure the three grinders and the espresso machine. At the far end, at a slightly lower level, is the pour-over bar with four V60s, an Über boiler and dedicated grinder.

The remaining space, which is considerable, is given over to seating. There’s a single, long, eight-person communal table in the centre of the room with plenty of space to move around it. A three-seat window-bar occupies the right-hand window, while a single, wooden bench runs along the right-hand wall with eight tables in front of it, each with a stool on the other side. All the stools, with the exception of those on the communal table, which are definitely single-seaters, can accommodate two people, as long as they know each other quite well.

TAP has three different espressos: one for black drinks, another for use in milk, with the third’s decaf. The single-origins on pour-over change every three months. Typically, I visited during the last week of the autumn offerings, so you can expect a different set of filter options than I had. That said, my Guatemala Petaton Huehuetenango was a lovely brew, rich, sweet and nicely balanced. Served in a metal jug with a tulip cup on the side, it was beautifully-presented on a small wooden with circular hollows, one each for the cup and jug.

I paired this with an excellent fine caramel apple crumble tart, a bit of a mouthful in more ways than one! A classic pastry tart base, it had a rich, sweet, sticky caramel and apple filling, topped with an oat-based crumble. Superb!

For a different perspective, you can see what fellow coffee blogger, Bex of Double Skinny Macchiato, made of TAP, Russell Square.