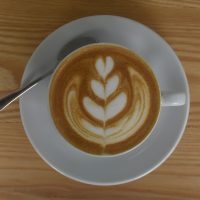 I wasn’t in Bangkok for long at the end of April, plus I was limited by a bad back, all of which meant I didn’t get around as much as I’d have liked. However, I was very impressed with what little I did see of Bangkok’s diffuse and diverse speciality coffee scene, including Size S Coffee + Bakery, a chance discovery at the end of the same road as my hotel. Despite that, I needed a tip off from to Lan Din Coffee, having already walked past Size S without noticing it!

Size S Coffee + Bakery does what the name suggests, although it’s also a roastery as well as a coffee shop and bakery, all of which comes in an unfeasibly small package. That said, it acts like it’s a big coffee shop, with a blend and single-origin on espresso and up to five single-origin filters, all roasted at the back of the shop (which is also where all the cakes are baked). There’s also a small breakfast and lunch menu if you’re hungry.

Size S Coffee + Bakery is in the Sathorn district, just south of the busy Rama IV Road, tucked away behind a hedge on the eastern side of Ngam Duphil Alley, which is how I managed to miss it. The front is all glass, which makes for a bright interior, but not really sunlit, due to the hedge and high buildings all around. This is helped by the clean lines of the interior, along with the white-painted walls and ceilings. Importantly for Bangkok, it’s also air-conditioned.

You can sit outside on one of two stools flanking an old barrel which acts as a coffee table. However, the staff and pupils from the local motorcycle school park up outside, so it can be noisy. Alternatively, head inside via the glass door on the right, which takes up about one third of the width of the store.

Size S goes back a long way, with the bakery and, beyond that, roastery, occupying most of the space, leaving a relatively small, L-shaped space at the front, home to the counter and the seating. The counter is directly opposite the door, while to the left are two four-person tables with low stools. Meanwhile, a long, narrow corridor runs along the left-hand wall, where six narrow windows, arranged into two groups of three, add to the bright interior. There’s a set of retail shelves between the two groups, while a narrow window-bar with four high bar stools occupies the remaining three windows.

The counter runs almost the full width of Size S, with the espresso machine, a two-group La Marzocco Strada and its twin grinders on the right, and a large display case for the cakes on the left. Finally, down the left-hand side, opposite the retail shelves, is a small brew-bar.

Size S has been going since 2012 and is very much a family affair run by Kong, who roasts all the coffee. Meanwhile, his sister does all the baking, with his wife running a second coffee shop, making Size S a chain of precisely two. When it comes to coffee, Size S punches well above its weight. There is a house-blend on espresso, a mix of Ethiopian, Honduran and Thai beans, where it’s joined by a weekly single-origin. There are also five single-origins on filter via either the Tiamo dripper or Aeropress.

On my first visit, I had a very fine cappuccino using the house-blend, the coffee coming through the milk, giving it a nice edge and some fruity notes. Meanwhile, the milk held the latte art all the way to the bottom of the cup. I returned on my way to the airport for a quick espresso, my last coffee of the trip. This had a lovely, syrupy mouthfeel with a touch of acidity, a caress more than a punch, providing me with the perfect send off.