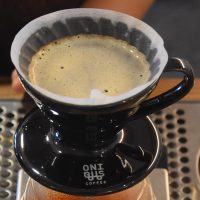 Onibus Coffee is a small coffee shop/roaster chain in Tokyo. Its Nakameguro location was one of my first stops when I came to Japan in 2017, my first time in the country. Back then, it also housed the roaster, a cosy arrangement given how small the place was. However, on my return to Tokyo in September this year, I discovered that the roaster was gone, relocated to a new coffee shop/roastery in Meguro, so I headed over there to check it out.

The new coffee shop/roastery is Onibus’ fifth location, joining About Life Coffee Brewers and Ratio &C, plus the original location in Okusawa, which, in true Coffee Spot fashion, I’ve yet to visit! The coffee shop is a similar size to the Nakameguro coffee shop, but the roastery, which has its own Meet the Roaster feature, is in a much bigger space to the left.

The coffee shop, the subject of today’s Coffee Spot, has the usual Onibus offering, with a several (five or six) single-origins available on both pour-over and espresso, where they are joined by the Step blend. If you’re hungry, there’s a small selection of cakes, all baked in-house.

The new roastery/coffee shop is at the northern edge of Yakumo, in Meguro City, near the Komazawa Olympic Park. On the south side of the main east-west road, it’s set back from the street, coffee shop on the right, roastery on the left, the new 22 kg Probat roaster clearly visible through the floor-to-ceiling windows. The coffee shop opened in May this year, with the roastery following in August.

Like the roastery, the front of the coffee shop is all glass, with tall, narrow, wooden-framed windows, door inset at the right-hand end. The counter is at the back, directly ahead of you as you enter, with the till in the centre, next to the bean selection and cake. The two-group La Marzocco Linea espresso machine is to the left, along with an Anfim grinder (for the Step blend) and an EK43 for the single-origins (espresso and filter). To the left of the counter, separated by internal floor-to-ceiling windows, is the roastery, while down its short, right-hand side, are a pair of V60s.

There’s a retail area immediately to your right, with merchandising in the window and a set of shelves on the wall holding retail bags of coffee. To your left, a low, wide bench runs along the window at the front, which extends slightly beyond the counter to run in front of the roastery, which is set slightly further back than the coffee shop. This leaves an ‘n’ shaped extension, with the bench continuing down the left-hand side, while there’s a low bench in front of the windows looking into the roastery.

The remaining seating is to the right, where a long, thin section extends towards the back, past the counter, the seating along the right-hand wall. There’s a two-person bench, with a tall, rectangular coffee table on either side of a short brick pillar, followed by a pair of square, two-person tables, chairs in line with the wall.

The décor is gorgeous, by the way, all wood and glass, including the floor with its inlaid wooden tiles, and the counter, which has a frosted glass section along the top. A neat touch are the14-sided speakers which hang from the ceiling.

The offering is the same across all Onibus outlets that I’ve visited except the About Life Coffee Brewers stand (which has guest roasters). There are currently five single-origins on offer, which can be had as pour-over or espresso, where they are joined by the ubiquitous Step blend.

Having worked my way through the single-origins at Ratio &C during my two weeks in Tokyo, I decided to have the Step blend in a two-shot latte, being rewarded with a lovely, rich creamy latte. The milk and coffee went well together, with the latte art lasting to the bottom of the cup. I also had a slice of the vegan, gluten-free coconut bread, one of a small range of cakes/cookies all baked in Onibus’ original store in Okusawa.

I decided to round things off with a V60 of the Colombian El Paraiso. A rich, smooth and full-bodied coffee which held its own as it cooled, it was served in the carafe, the cup on the side, all presented on a wooden tray. I much prefer this, which is in contrast to other Onibus locations, where the filter coffee is served directly in the cup.

Finally, I had a pair of hexagonal cookies. One was like a shortbread, while the other, just as tasty, offered a real contrast in texture, resembling a British gingernut, albeit cranberry rather than ginger flavoured. As a combination, they were the perfect end to my day!