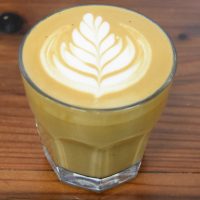 Quite a lot has changed since I was last in San Jose in April. Back then, Chromatic Coffee had its original store in Santa Clara, along with a new location in downtown San Jose, while the roastery was on Lincoln Avenue, just around the corner from my friend Richard’s house. Fast forward just over seven months and, while the Santa Clara location is still going strong, everything else has changed.

The roastery, admittedly, is still on Lincoln Avenue, but it’s no longer around the corner from Richard’s house, since he’s moved to Willow Glen. The downtown coffee shop has gone, however, Chromatic deciding to relocate it to the roastery, where it now serves coffee to all-comers from a large space at the front of the roastery.

There’s a simple coffee menu, with the Gamut blend on espresso, although this is occasionally changed up. This is joined by a daily batch brew using the new Ground Control Cyclops, while if you’re hungry, there’s a selection of pastries from Manresa Bread. One thing to be aware of: the coffee shop is technically classified as a coffee truck, only able to serve coffee in takeaway cups, so don’t forget to bring your own.

When I visited in April, the space was split in two, the roastery at the back, while the front was occupied with offices and lab space. The coffee shop, which opened in October last year, now occupies part of this front area, with the roastery behind. The public cuppings are still going strong, by the way, taking place every Thursday morning.

You enter at the back of the coffee shop, on the right-hand side. The space is still quite simple, open to the A-frame roof, which soars high above. There are retails shelves along the right-hand wall, with the counter at the front. The coffee shop doesn’t quite stretch the far wall of the roastery: instead, a tall divider forms the left-hand wall of the coffee shop, continuing around to the right to provide the back wall, separating coffee shop and roastery. There’s a gap in the corner, which is filled with coffee sacks, allowing you a view of the roastery over the top.

There are four, four-person tables in the centre of the space, arranged in a square, with a single, two-person table against the back wall and that’s it. You order at the large, L-shaped counter, where you’ll find the till and cakes down the left-hand side. The front, meanwhile, which faces the seating, is the preserve of the Synesso espresso machine. You need to file around here to collect your coffee, which will be waiting for you at the far end of the counter.

Talking of coffee, Chromatic offers a simple, espresso-based menu, with various options, including a cortado and flat white. Filter coffee, meanwhile, is provided by the new Ground Control Cyclops batch brewer. Manufactured in nearby Oakland, it won the SCA’s Best New Commercial Product Award of 2018. It aims to deliver similar quality to pour-over, but in batch-brew volumes, using a new technique that makes multiple extractions from the same ground coffee. For more about Ground Control, including how it’s been received in the Bay Area, here’s an excellent article in the San Francisco Chronicle.

Sadly, I didn’t have a chance to try its output, but the baristas at Chromatic seemed very impressed with both its quality and consistency. Instead, I opted for a flat white to start my day, along with a warm Kouign Ammon, the same pastry I had at the Santa Clara location (which was good enough for Chromatic Coffee to finish as runners-up in 2019 Coffee Spot Best Cake Award). It was every bit as good this time around, as was my flat white, the coffee and milk in perfect harmony. Richard, meanwhile, had a latte and a Monkey Bread, which he was equally happy with.