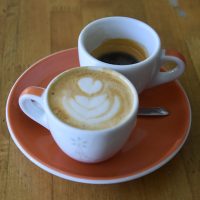 On my first visit to San Jose in 2017, Chromatic Coffee was already an established name in the area. Unfortunately, I was too early for the downtown San Jose location, which opened in June that year (and, sadly, has since closed), so my only option was the original, flagship branch on Stevens Creek Boulevard. Located 6 miles west of San Jose in neighbouring Santa Clara, I wasn’t able to visit on that trip. However, when my friend Richard, who I was staying with on this trip, said he would drop me off on his way to work, I jumped at the chance.

Chromatic Coffee is part of a small outdoor mall, with a large, outdoor seating area and plenty of seating inside. The coffee, roasted in-house at the San Jose roastery (which, since the end of 2019, has its own coffee shop), is available in retail bags. There’s a blend (which switches between Gamut and Heart’s Desire) and single-origin on espresso, with multiple seasonal choices on batch-brew (blend plus two single-origins) and pour-over (decaf plus two more single-origins). As well as coffee, there’s craft beer, while if you’re hungry, Chromatic has a toast-based brunch menu, grab-and-go salads and a large selection of cakes and pastries.

Ironically, given its location, Chromatic Coffee is next to Saratoga Creek, by the junctions with the Lawrence Expressway and I280. At the back of Stephen’s Plaza, a small outdoor strip mall north of Stevens Creek Boulevard, it’s not visible from the road, so unless you’re shopping at the mall, you’re unlikely to stumble across it. The good news is that if you don’t have a (friend with a) car, it’s on the No 23/323 bus route between San Jose and Cupertino.

There’s a large outdoor seating area, some shade being provided by several large umbrellas. Options include various round and square tables, while in front of Chromatic are two wooden benches, backs to the windows, each with a pair of two-person tables, shaded by the overhanging concrete roof lining the whole mall.

The front of Chromatic is all glass, with several large, square windows, glass double doors off to the left. Inside, it’s a fairly average mall unit, maybe three times as deep as it is wide, with the counter, enclosed kitchen behind, at the back on the left. The bulk of the seating is in the front section, but there are four small, square standing tables projecting from the right-hand wall opposite the counter, where a narrow corridor leads to an additional seating area at the back. This has a long, narrow, eight-person communal table running front-to-back and a four-person bar inset into the wall to the kitchen on the left. Finally, there’s an L-shaped children’s play area beyond the communal table. While the front, with all its windows, is quite bright, the lighting here at the back can best be described as subdued.

Returning to the front, an L-shaped bar runs across the windows, continuing along the right-hand wall, seating provided by ten tall, wooden-topped stools. There are also four tables to the right, two square, three-person ones in the middle, and two round, four-person ones to the right, leaving an open path from the doors to the till at the counter’s left-hand end. Along the way, you pass the merchandising and retail shelves that line the left-hand wall. The latter are packed with retail bags, offering pretty much the entire roastery output.

Three large boards on the wall behind the till hold the menu, while a chiller cabinet to the left has grab-and-go salads below and cakes above. To the right is the La Marzocco GB5 espresso machine, followed by the collection point next to the pour-over area with its Kalita Wave filters. There’s a fairly standard espresso-based menu, the coffee choices displayed on a plastic screen in front of the espresso machine. In addition, there’s a range of dessert coffees and seasonal drinks.

I had a 1&1 of the single-origin espresso, a Kunjin from Papua New Guinea. This was served in two espresso cups, balanced on a single saucer (causing much consternation on social media, particularly from The Pourover). In milk (as a macchiato/piccolo depending on your level of pedantry), it was a little anonymous, although coffee and milk went well together, providing a rich, creamy drink. As an espresso, it came into its own, lovely, smooth, well-rounded and well-balanced.

I paired this with a Kouign Ammon, which, served warm, was gorgeous. Rich, sweet and slightly sticky, it was the perfect accompaniment to my coffee. I followed this with lunch, a goat and cheddar cheese melt: two slices of bread, stuffed full of cheese, the goats cheese providing the lion’s share of the flavour, with the cheddar and a garlic aioli chipping in. It came with a generous side salad, topped with a lovely balsamic vinegar dressing.

December 2019: Chromatic Coffee, Santa Clara was a runner-up for the 2019 Best Cake Award.