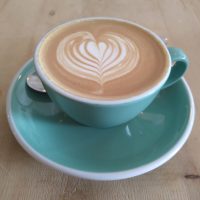 I have a complicated relationship with the Wirral, the peninsular in northwest England between the River Dee and River Mersey. Visible from the windows of my parents’ house in Holywell in North Wales, it was literally a backdrop to my childhood. Despite this, I’ve been an infrequent visitor, partly due to the difficulty in getting there. Although Heswall, home of today’s Coffee Spot, is less than 10 km away as the crow flies, it’s nearer 40 km by road and, typically, around two to three hours by public transport!

It’s also true that, until recently, there’s been little incentive to visit with my Coffee Spot hat on. However, that’s slowly changing and, on Monday last week, I set off to check out Wylde Coffee, which opened in November 2019 and has a second, more food-orientated location in West Kirby called Lateral. A self-styled Scandinavian-inspired bistro, Wylde Coffee serves a bespoke house blend and decaf on espresso, both roasted by old friends, Neighbourhood Coffee, with regular guests on batch brew/pour-over. There are breakfast and brunch menus, backed up with plenty of cake, all served in a bright, airy, relaxed space in a small parade of shops just off the A540, the main road through Heswall.

Wylde Coffee is in a small parade of shops on the north side of Telegraph Road, as the A540 is known in this bit of Heswall. That said, it’s set back from the main road, the shops being served by their own parallel road with plenty of on-street parking. I had no problems finding a space (free for an hour) on a busy Monday afternoon.

Tucked between an estate agent and off licence, Wylde Coffee cuts a striking figure, with a black-painted, old-fashioned shop front. There’s a central, recessed, multi-paned glass door flanked by large pictures window on either side, each with its own bench on the pavement, which is the extent of the outside seating.

Inside, the recessed door forms a bay on either side, each occupied by a two-person window bar. The remaining seating is arranged in three rows running front-to-back, leaving space for you to approach the counter, which is at the back on the right, by going down one side and leaving by coming back along the other side (although there’s no formal one-way system). The seating, by the way, is well spaced out to achieve the necessary social distancing.

The counter is a simple, wooden affair, in keeping with the simple wooden furniture and décor in the rest of the store. The till is on the left, while the cakes are in a large display case to the right. The coffee part of the operation is on a worksurface at the back, the La Marzocco Linea espresso machine and it grinders underneath a simple menu on the left, while the batch brewer is on the right.

A selection of sandwiches is displayed on the counter, but there’s a more extensive menu, listing the full range of drinks, along with the breakfast and brunch options, including staples such as banana bread and avocado toast. You’ll find bottles of hand sanitiser and extensive details of the Housemartin espresso blend on your table. I lucked out on my choice of table, which also had the wifi password and a copy of the full menu!

Turning to the coffee, the Housemartin blend is a bespoke seasonal blend, roasted exclusively for Wylde Coffee by Neighbourhood Coffee. The current version is a mix of a naturally-processed coffee from the Posses community in Brazil and a washed coffee from a group of small farms near Popaylin in Cauca state, Colombia. This is available through a concise espresso menu, while there are filter options from a regularly changing guest roaster, which was Colonna Coffee during my visit. You can either have batch-brew or pour-over through the V60.

I decided to play it simple and had the Housemartin in a flat white, where the coffee’s fruity notes came clearly through the milk. Definitely worth travelling to the Wirral for!