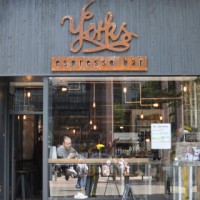 July 2016: with the move to roasting in-house, the Espresso Bar now serves a single-origin espresso  and decaf, plus a weekly single-origin filter available through Aeropress or V60.

January 2018: I can confirm that the rumours are true: the Espresso Bar has closed for good. That now means that both Yorks and 6/8 Kafé are gone from either end of the Great Western Arcade.

August 2018: it seems that I jumped the gun. Yorks Espresso Bar is back at the end of Colmore Row. I’ve not had a chance to check out the shop since I reopened, but it looks very similar from the outside.

December 2018: and, as you were. It looks like Yorks Espresso Bar has gone for good, with its comeback a rather short-lived affair.

The Great Western Arcade, one of Birmingham’s beautiful Victorian shopping arcades, runs north-south from the semi-pedestrianised Colmore Row, where it’s opposite the entrance to Snow Hill Station, to Temple Row, where it’s opposite a branch of Coffee Republic. Oh well, you can’t have everything. Yorks Espresso Bar occupies the right-hand corner of the arcade’s northern end, facing onto Colmore Row. And the branch of Costa across the way. Oh well, you really can’t have everything…

Yorks is about as tall as it is wide and maybe twice as deep. The ground floor has glass on two sides, the shorter edge, complete with recessed corner-door, facing Colmore Row, the longer side running along the arcade’s central aisle. In that respect, it’s reminiscent of Bath’s Society Café, which occupies a similar spot at the end of The Corridor. If anything, however, it’s even more beautiful.

Window-bars, complete with bar stools, line the windows, providing all the ground floor seating. Stairs along the back wall lead up to the mezzanine via a 90 degree right-hand turn. The rest of the downstairs is taken up with the amazing counter, which forms a curving L-shape underneath the mezzanine. There is a small extension at the front along the right-hand wall, holding the sandwiches and the chiller cabinet.

You very much face the corner of the counter, which is opposite you as you enter. Dead ahead, a beer tap dispensing cold-brew. To your right, cake then sandwiches, separated by the bulk-brew filter. To your left, bags of coffee for sale, masking the filter rack for the V60s, beyond which are three grinders (two espresso plus decaf) and a bright-yellow two-group La Marzocco espresso machine. It’s very well laid out with a natural flow, taking you along the length of the shop, depositing you by the stairs. If you’re waiting for takeout, there’s plenty of space at the front, where you can stare longingly up at the mezzanine.

Talking of which, the bulk of the seating’s up here. There’s a bench on left-hand wall with four two-person tables, plus a row of three three-person tables overlooking store-front below. There’s also a four-person table in the niche by the stairs. The décor here is slightly less elegant. Concrete walls, floor and ceiling  are present throughout, but downstairs they’re masked by an abundance of wood. Upstairs, however, they’re on stark display, with only the back wall clad in wood. Despite this, it’s a lovely spot with exposed copper pipes for the lights (a feature that is also on display downstairs).

I had a long chat with both baristas, who I’d met before on previous visits to Birmingham. We started with a V60  of the Ethiopian Rocko Mountain Reserve (their recommendation, other options being a Kenyan Karimikui and Caravan’s Special Bru filter blend). Well-presented in a flask on a tray, cup on the side, initially it was really juicy and fruity. However, as it cooled, it developed a bitter edge that wasn’t really to my liking, which is extremely rare.

I lunched on a cheddar, pickle and salad sandwich on Focaccia. With it’s tasty, sweet pickle; mature, tangy cheddar, plus plenty of salad, it was lovely. Before leaving, I tried the Colombian El Mirador single-origin espresso (Caravan’s Market Blend was the alternative), which, sadly, was too bright for my palette.