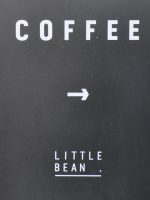 Finding today’s Coffee Spot, Little Bean, was a combination of good luck, guesswork and determination. I first came across Little Bean’s coffee at AUNN Café & Co. on my first trip to Shanghai in October 2016. Back then I was told that the roastery/coffee shop was in Pudong, so when I found myself back in Shanghai the following year, staying/working in Pudong, I was determined to track Little Bean down.

Although I didn’t know it at the time, Little Bean occupies a unit in an outdoor mall on Jinyan Road, across the river from Century Square. A spacious coffee shop, complete with a dinky Probat roaster behind the counter, occupies the ground floor, while upstairs there’s a training school and on-site bakery.

Turning to the coffee, Little Bean has a pair of single-origins on espresso (it also has two espresso machines, but I never worked out if the machines/origins were paired in any way) and another five on pour-over through the V60, plus you can buy the beans. As well as freshly-roasted coffee, you can have freshly-baked bread, with a wide variety to choose from, including croissants and various pastries. Finally, there’s a very tempting array of cakes/desserts to choose from if you want something sweet.

February 2019: Little Bean is still going strong, but has cut back its offering, with a sole single-origin on espresso, and another on pour-over, both Brazilian coffees during my visit. There are also two additional single-origins on pour-over, sourced by Nordic Approach. The roaster behind the counter is also gone, production having moved to a dedicated roastery.

I had a vague notion of Little Bean’s location (Pudong’s the size of a small city) since on my previous trip, I’d put a star in Google Maps about a 20 minute walk from my hotel (Little Bean’s still not on Google Maps). When my meeting finished slightly early one afternoon, I decided to explore the local area while there was some daylight left. It turns out that it’s a rather pleasant area (for a large city) and, after a bit of wandering, I came across the area where I’d put my star, a rather modern (although everything’s rather modern in Pudong) outdoor mall.

Despite unpromising names such as Starbucks and the Pacific Coffee Company appearing on the boards, I had a good feeling about it and I was right! There, by the side of the river, just down from a footbridge leading to the Science and Technology Museum, was Little Bean, housed in perhaps the most awkward-shaped building I’ve seen in five years of the Coffee Spot.

The setting (neighbours not withstanding) is quite pleasant. The building is, shall we say, interesting. Consider a wedge with a rounded end (like a slice of pie) only someone’s cut the narrow end off. Badly. Then there’s the visual aspect. Looking like a wooden box on concrete stilts, the walls of the entire ground floor consist of windows. Despite, or maybe because of this, it’s actually lovely, flooded with light, with slightly sheltered outside seating on all three sides, consisting of rows of two-person tables.

Inside, the layout’s just as weird. There are doors on the left and right, while the counter occupies the curved back of the wedge, overlooking the river. This leaves the front, the narrow part of the wedge, facing the road. The door on the right takes you to the end of the counter, while the left-hand door drops you in the middle of the seating. Talking of which… Where do I start?

You can sit at the end of the counter, by the V60s, on one of four bar-stools. Alternatively, there are four two/three-person tables with chairs, three along the front and one on the left, under the stairs. Did I mention the stairs? No. Okay. There are two flights, one running back-to-front on the left wall (staff only) and the other running front-to-back on the right, leading to the training school and toilets, which you can use. The remaining seating is round. There are, in fact, three round seating areas, one on the right, two on the left and, honestly, if you need to know more, take a look at the gallery, then write your own description!

Weirdness aside, it really is lovely, easily my favourite Shanghai coffee shop. It has a very modern, western feel to it, but more of the Scandinavian-inspired clean lines than Shoreditch hipster. It probably helped that tango music from a personal favourite, Gotan Project, was playing in the background both times I visited.

My first visit was in the evening, when I’d just tracked Little Bean down. There were two naturally-processed single-origin espressos: a Jaguara PB from Brazil and an Ethiopian Kayon Mountain, so I went safe since it was my first espresso-based drink of the trip and had the Brazil. The options were short, long and with milk, which I selected, being rewarded with something similar to a flat white. It had typical chocolate notes, but was incredibly rich and fruity: simply gorgeous. I paired this with an equally gorgeous raspberry cheesecake. Divine.

Suitably impressed, I returned the following morning for breakfast, getting up extra early to do so. I had a pour-over this time, another natural, an Ethiopian Burtukaana. Another fruity coffee, this one had lighter, well-balanced flavours, but with plenty of body: easily one of the best filter coffees I’ve had this year. All the coffees came with a postcard containing tasting notes and a glass of warm water (warm being standard in China).

Since Little Bean bakes all its own bread on-site, the coffee shop was full of the smell of freshly-baked bread, so breakfast was an easy choice. I had a small loganberry loaf and a slightly smaller raisin one, both of which were delicious.

December 2017: Little Bean Roastery was a runner-up for both the 2017 Best Overseas Coffee Spot and Best Filter Coffee Awards.

March 2019: you can see what I made of Little Bean’s second store, Little Bean Coffee Museum, in the basement of the K11 Mall.

If you want to read more about my trip to China in 2017, including the other Coffee Spots I found along the way, there’s a page dedicated to the trip.