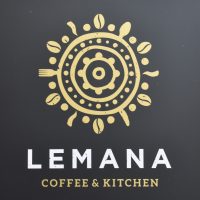 Lemana Coffee & Kitchen is a lovely place, tucked off the High Street in Lymington, Hampshire, on the southern edge of the New Forest. I first visited, back when it was Lemana Café, in November 2013. Since then, I’ve been an infrequent but regular visitor, popping in during my annual trips to the area. It’s changed quite a bit over the years from when it started as a family-run café, first opening in 2010. In 2015 it rebranded to Lemana Coffee & Kitchen, switching over to serve Has Bean coffee while in May 2018, it changed ownership, moving to local roasters, Coffee Monger’s Roasting Company. Throughout it’s stayed close to its roots as a lovely, friendly, welcoming café with great food.

These days there is a breakfast/brunch menu until midday, followed by a lunch menu until 3:30, with cakes available throughout the day, all cooked fresh in the kitchen at the back. Turning to coffee, there’s a bespoke house-blend on espresso and, in a recent introduction, single-origin filter, with two options through the V60 or Aeropress. Lemana also has a range of teas, plus wine and beer. You’re welcome to sit inside or out and dogs are very welcome too.

Lemana Coffee & Kitchen takes a little bit of finding, but is definitely worth it. Tucked away at the end of Madeira Mews near the eastern (river) end of Lymington’s long High Street, it occupies a long, thin single-storey building along the left-hand side of the Mews, with an equally long, thin courtyard in front, home to the outdoor seating. In years past, this has been full of tables and chairs, but on my most recent visit, these had been relegated to the shelter of a plastic gazebo-type structure at the back of the courtyard (probably just for the winter).

The interior layout is dictated by the building as much as anything else, and while the furniture’s changed, along with the décor, the basic layout hasn’t. Glass double doors open roughly in the centre of the long front wall, which faces onto the courtyard. To the right is the large counter, beyond which, through an open doorway, is the large kitchen. Meanwhile, to the left, the seating’s arranged around the remaining three walls.

Lemana used to have a rather eclectic collection of chairs and tables ranging from a pair of comfortable armchairs to some large six-person tables, but these days things are much more uniform, the tables laid out in neat rows, the décor more subdued. Dare I say it, it now has the look and feel of a speciality coffee shop.

The remaining seating is along the back wall, with a long bench running from the right, where it starts opposite the door, up to the rather lovely fireplace. The bench has a four-person table at either end, with a two-person table in the centre.  Finally, in front of the fireplace, is one last two-person table.

I was there for a late lunch, tucking into a rather excellent goat’s cheese and chutney sandwich, complete with salad and coleslaw. The salad, in particular, was impressive. Too often these are an afterthought, chucked in with the sandwich, but this was a decent salad in its own right.

Since my last visit, Lemana has switched to local roaster, Coffee Monger’s Roasting Company, introducing single-origin filter coffee in the last month or so. During my visit there was a choice of an El Salvador and a Rwanda through either V60 or Aeropress. Naturally I had to try the pour-over, selecting the Rwanda as a V60. This was expertly made by barista Jass, and served in a glass cafetiere inner, with a glass/saucer on the side. The coffee had a very clean, clear colour in the carafe and this came across as I drank it, with some lovely, subtle fruity flavours coming through.

I rounded things off with a freshly-baked and rather delicious mince pie, on the house. I must confess that I am not normal a fan of mince pies, but this was amazing.

November 2018: this is an updated version of the original post which was published in February 2014. You can see what has changed in my Coffee Spot Update, with an earlier update from November 2015.