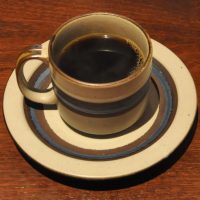 Although I didn’t visit the city on this trip, to celebrate my return to the Chicago area, I present Monday’s Coffee Spot, Café Integral. I first came across Café Integral in New York City this time last year when I visited its original location, inside the American Two Shot clothing store. Naturally, I was keen to try out the Chicago branch, which is in the lobby of the Freehand Hotel in Chicago’s River North. This came highly recommended by none other than champion flat white inhaler, Runaway Kiwi. She’d checked it out earlier in the year, declaring it her favourite place in Chicago. You can’t get a better endorsement than that!

What makes Café Integral stand out from the crowd is its focus on Nicaraguan coffee. The Vega family, which owns Café Integral, has close ties with several farms in the country. There is a standalone coffee shop in New York as well as this one in Chicago, which makes it a national chain. Sort of. All the coffee is sourced in Nicaragua and roasted in Brooklyn. There’s usually one option on espresso, bulk-brew and pour-over, all backed up by a small, but interesting food menu and decent cake selection.

May 2018: Café Integral now has coffee shops in three Freehand Hotels: Chicago (this one), Miami and Los Angeles, as well as a standalone coffee shop in New York. Sadly the original coffee bar in American Two Shot has closed.

Café Integral, which opened in early 2015, is just north of the river/west of Michigan Avenue in Chicago’s River North. Located on the left-hand side the Freehand Hotel, it has its own door opening directly onto the street or you can enter via the lobby. There are two windows to the left of the door, but despite this, the lighting is subdued, becoming more so the further back you go.

However you enter, you’ll find yourself in a spacious waiting area with the counter to your left, all kitted out in dark wood. There’s plenty of room for those waiting to order/collect, although if you are staying, Café Integral is a civilised place: just take a seat and the staff will bring your drink over when it’s ready. Talking of seating, there’s a small bar at the window-end of the counter, but otherwise, the seating stretches out ahead of you, blending seamlessly into the general lobby seating as you go further back.

Moving past the counter, there’s an eight-person communal table on the left, with a pair of bars against the right-hand wall. The space then narrows and there’s a four-person table with a couple of bench seats on the right. Beyond this, the seating become more lobby-like, with a big L-shaped sofa on the left with a couple of coffee tables and then another sofa unit, this time U-shaped, beyond that. You’ve now reached the back, but there’s more seating in the lobby proper off to your right, consisting of further sofa-seats. Steps at the back of the lobby lead to a small, raised area where you can find some cosy, intimate nooks to the left and right, overlooking the floor of the lobby.

When it comes to the coffee, no expense has been spared. Café Integral has just the second Modbar installation (complete with espresso, milk and pour-over modules) in Chicago. The baristas told me that they really liked it since it opened up the counter, allowing them to talk to the customers.

Café Integral offers a single-origin and a blend. Usually the same coffee is on espresso and bulk-brew, with the other available as a pour-over using the Chemex. This is changed on a daily basis, while a new single-origin arrives every six weeks or so.

Since Runaway Kiwi had already comprehensively tested out the flat white options, I had a Chemex of the single-origin, the delightfully-named Casablanca (those who know will know why this had to happen). This was an amazing coffee: immediately fruity, even before I’d taken a sip, I was instantly won over by the wonderfully heady aroma, making it one of the best-smelling filter coffees I’ve had.

After that lead in, there was always a danger that the coffee itself would be an anti-climax, but it more than lived up to expectations. It was served in a conical pottery flask with a neat cup and saucer on the side. The first sip was amazing: I now know what people mean when they say that a coffee is “bursting with fruit”. In many ways, the coffee got even fruitier/juicier as it cooled and was just as good when it was cold.

I paired this, on the barista’s recommendation, with an apple turnover. This was also excellent, with light pastry and a moist, sweet filling.

September 2017: I liked Café Integral so much that when in the city on business, I stayed in the Freehand so that I would have superb coffee every morning when I got up.

You can see what fellow coffee blogger, Bex, made of Café Integral, which is in her guide, Nine Speciality Coffee Shops To Try in Chicago.