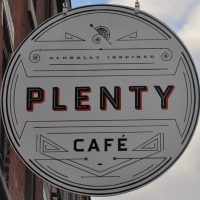 When I first visited Philadelphia, Plenty Café, in Rittenhouse, was one of the first coffee shops that my friend Greg introduced me to. Back then, Plenty was a chain of precisely two, the Rittenhouse branch having recently joined the original on East Passyunk Avenue in South Philadelphia. Having really liked the Rittenhouse branch, I was determined to try out the original on my return to Philadelphia in 2016. Sadly, for various reasons, I never actually got around to completing my write-up, so when I finally returned to Philadelphia two years later, I decided to rectify matters…

The original Plenty Café is quite a different beast from Rittenhouse. Here the emphasis is more on food, with full (and excellent) breakfast, lunch and evening menus, backed up by a generous selection of cake. There’s also beer, wine and a fully-stocked bar. And then there’s coffee, for, despite the focus on food, Plenty has the sort of coffee-offering that you’d find in any decent speciality coffee shop. There are bespoke blends on espresso (Gallivant) and bulk-brew (Wayfarer), roasted by Lancaster’s Square One. The Gallivant blend is joined on espresso by a bespoke decaf (Voyager) and by a rotating single-origin, also from Square One.

This is the original Plenty Café, with two further branches, the previously-mentioned one in Rittenhouse, and a newly-opened Queen Village branch, which I’ve also visited, but yet to write up. All three are, in look and feel, very different, but all, in their own ways, very elegant. Rittenhouse is compact, with a neat mezzanine, while Queen Village is a large, open square, with windows on two sides. In contrast, the original on East Passyunk Avenue, is long and thin, with a front and rear section, separated by a small step.

From the street, on the northern side of Passyunk Avenue, Plenty Café doesn’t seem very big. The front is essentially all glass, with some tables outside on the broad pavement, plus a colourful awning to catch your eye. Even so, I almost walked past back in 2016 after my 30-minute march in freezing (-4⁰C) temperatures from Ox Coffee.

The door’s on the left, leading into an airlock arrangement, with the second door on your right, depositing you at the front of Plenty. There’s a four-person window-bar and a scattering of small, square two-person tables in the front part. Four of these are along the right-hand wall, two line the centre, while there’s one each on the left-hand wall and against counter, which marks the end of the front section.

A small step on the right leads to the back part, which is dominated by the counter, running full length on the left. Although separated by no more than a step, the two spaces feel quite different: the front more of a traditional café, the back taking on the feel of a bar.

The back has less seating, just two high, four-person tables against the right-hand wall, then, beyond them on the left, the counter effectively turns into a bar, lined by seven high chairs. The front part, meanwhile, houses the coffee with a two-group La Marzocco GB5 and its three grinders facing forward. The till is just around the corner, where you’ll also find the cake, although you only need to come here if you’re ordering takeaway since Plenty, refreshingly, offers full table service.

On my first visit in 2016, Plenty did pour-over, although it’s since stopped. It also had regular guest roasters and I had a lovely well-balanced Ethiopian from Oakland’s Supersonic (now AKA) as a pour-over. I was dithering over something to go with it, so the barista suggested the apple cake, an awesome choice. The cake was rich and moist, but the clincher was the apple, the cake being layered with slices of apple, adding extra sweetness and moisture to an already amazing concoction.

I’ve come to think of this (and Plenty’s Queen Village branch) as more of a restaurant doing great coffee than a coffee shop doing food (although you’re still welcome to come in for coffee if you like), so I popped back that evening for dinner, sampling one of Plenty’s small plates (which might be small by American standards, but which are more than enough for a light dinner for one). I tried the roasted cauliflower, while I had the pistachio torta for dessert, both of which were excellent.

On my return two years later, I was there for Saturday brunch. Having over-caffeinated myself at the nearby Rival Bros, I skipped coffee and went for the stuffed French Toast. I often find French Toast disappointing, promoting sweetness over substance, but this was awesome, with light, fluffy bread, and, although sweet, not sickly sweet. There were plenty of berries too, all topped with a generous helping of mascarpone. Definitely the gold standard of French Toast!