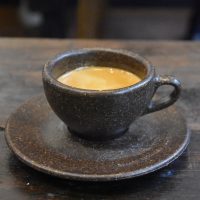 If it weren’t for the sign proclaiming “Coffee” in large letters above the window, you could easily miss Just Between Friends Coffee.  Instead, it does its job rather effectively: I’d walked by the previous day on my way to Siop Shop and it caught my eye, prompting me to return the following day with Charlotte.

Just Between Friends, which opened in the spring of 2018, occupies a roughly square space, the door at the front, left-hand corner, set at 45⁰. Three tall, narrow windows run along the front of the store, which is almost as tall as it is wide. Inside, the layout is very simple. The broad, tiled counter is at the rear, behind which a large picture window overlooks a courtyard (which sadly belongs to the adjacent pub rather than Just Between Friends). However, having windows front and back makes it a very bright space. The décor, by the way, is wonderful, with plenty of exposed brick and dark wooden floorboards.

A set of retail shelves line the left-hand wall, leaving a clear line between door and till, which is on the left-hand side of the counter. The seating, meanwhile, is arranged around the remaining two sides, with a broad window-bar at the front (seating perhaps three) and a wooden box-seat along the right-hand wall with three, hinged hexagon tables. You can sit on the bench, or at one of several very comfortable, low, padded stools. Finally, a long, thin bench runs down the centre of the space. You can either sit on it, or use it as a coffee table, sitting on one of the stools.

Turning to the coffee, Charlotte, who shares my love of good, naturally-processed coffees, went for the batch-brew, a Nemba from Burundi, while I (knowing I could also have a sip or two of Charlotte’s filter) when for Assembly’s seasonal espresso, a washed El Salvador. This was served in a Kaffeeform cup, which pretty much made my day, since I’ve been carrying mine around in my rucksack for the last 2½ years, ever since I got it at the London Coffee Festival in 2016. My espresso was every bit as gorgeous as my cup, a well-balanced, fruity espresso, while Charlotte’s filter was even fruitier, bursting with flavour!

1 thought on “Just Between Friends Coffee”