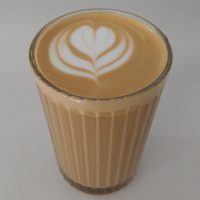 Time & Tide Coffee opened in November 2018, nine months before Amanda and I drove through Saco and Biddeford in August 2019, looking for somewhere for lunch on our way to Boston. Although I’ve been through since, both by car and on the train, that was the last time I stopped here, and I’m rather annoyed to have missed out. This time, however, I was better prepared, making a special trip down from Portland on Monday lunchtime on Amtrak’s Downeaster, which stops just across the river at Saco.

Time & Tide occupies the right-hand half of the ground floor of the lovely brick-faced L. Anton Building, part of the Biddeford Main Street Historic District, whose structure dates from the 19th century. Inside, Time & Tide has a stripped-back look, with a simple, uncluttered layout. The offering is similarly simple and uncluttered, with a commendably concise espresso-based menu offering a blend (typically The Commodore) and Twilight Decaf, with another blend (Year One) on batch brew filter, plus several seasonal and signature drinks, with all the coffee roasted in Time & Tide’s roastery across the road. If you’re hungry, there’s a toast-based breakfast/lunch menu, plus a selection of cakes and pastries.

Saco and Biddeford straddle the Saco River at a point where it drops precipitously (around 15 metres in all) over a series of falls on its short journey to the sea. Saco is on the north bank, although it also lays claim to Factory Island, the larger of two midstream islands and home to the Amtrak station, where the Downeaster stops. Biddeford, meanwhile, occupies the south bank and is left with the smaller Springs Island, which carries US 1 across the Saco just a little way upstream from Factory Island.

Time & Tide Coffee is on Main Street, which runs through both Saco and Biddeford. Heading south from Portland, it’s on your left, just after you cross the river into Biddeford. Occupying a large, spacious single room with a central, recessed door between two large picture windows, it’s a lovely spot, with a stripped-back décor, white walls, woodwork and ceiling, plus old wooden floorboards.

The aim was always to offer a simple, uncluttered space and, as a result, the seating has only been slightly thinned out (by a pair of tables) in response to the COVID-19 pandemic. A two-person table occupies the window to the right of the door, while to the left is a three-person window-bar, both with views across Main Street as it climbs up from the river, the three-storey brick façade of one of the old mills providing a wonderful backdrop.

The rest of the seating is set back on the left, where you’ll find five well-spaced two-person tables, two against the left-hand wall, two in a row down the middle and one at the back. The counter, meanwhile, is against the back wall on the right, the space in front kept clear for customers who are ordering/waiting for their coffee. Finally, there’s a set of retail shelves on the right stocking Time & Tide’s coffee and merchandising.

Time & Tide roasts all its coffee in its own roastery across the road in one of the old mill buildings. There are three blends for use in the café, The Commodore, designed for espresso, the Year One Anniversary Blend, which is roasted for batch brew filter, but can also be used for espresso, and Clambake, which is intended for cold brew. These are backed up with a selection of (typically three to five) single-origins which are offered for sale in retail bags, online and wholesale. You can also buy boxes of Steeped Coffee, bags of either The Commodore or Twilight Decaf pre-ground for immersion brewing.

Time & Tide has a very simple toast-based menu, offering mostly vegetarian or vegan options. I had already been pre-warned on Instagram that it was seaweed week, so felt compelled to try one of two specials (available until Sunday, 1st May), the Avocado and Sea-Beet Kraut Toast. This was a classic avocado toast with the addition of sustainably-grown seaweed from Atlantic Sea Farms. This looked like pickled red cabbage, but had a distinctly salty whiff to it, although it tasted surprisingly well-balanced. I can’t say I would order it every time over a standard avocado toast, but I enjoyed it.

I paired this with a cortado, served in a single-walled glass. Normally this would be made with The Commodore, but I visited on roast day and the coffee shop was running short, so had switched to the Year One Anniversary Blend. This combined well with the milk to produce a sweet cortado, with classic biscuit notes (that’s UK biscuits, not US ones), which I enjoyed while sitting in the window, admiring the architecture of the mill across the road.