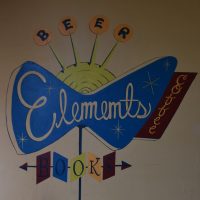 Today’s Coffee Spot, Elements: Books Coffee Beer, is the second of two from this week’s visit to Biddeford. Like Monday’s Coffee Spot, Time & Tide Coffee, it’s on Main Street, albeit a little further on, close to the junction with US 1, which runs through the northern part of Biddeford. Like Time & Tide, Elements is both a roastery (Elements Coffee Roasters) and coffee shop, although Elements predates Time & Tide by a few years, having opened in 2013, with Elements Coffee Roasters setting up shop in early 2018. And, as the name suggests, Elements: Books Coffee Beer also offers beer (and wine), and it’s a book shop too!

Elements occupies a large spot on the corner of Main and Jefferson, with the bookshop part of the business on the left, and the coffee shop part at the front and on the right, although there’s plenty of overlap between the two. Elements offers a standard (American) coffee menu, with the usual (large) sizes of both espresso-based and batch brew filter. There’s also a selection of around five seasonal single-origins on pour-over through the Kalita Wave. Meanwhile, if you’re hungry, there’s a range of bagels, small plates, ice cream and pastries.

Effectively two long, tall, thin units knocked into one, from the street, Elements provides a unified front, with a central, recessed door, flanked by tall windows on either side, each with a pair of two-person tables in front. This is undermined by a second door on the right, while on closer inspection, what appeared to be the central door, is, in fact, the door for the left-hand unit.

The interior of Elements matches this split into two units, while at the front, the party wall has been knocked partially through, a supporting steel joist left exposed for all to see. The large counter, a near island affair, straddles the knocked through wall, neatly connecting the two parts.

The left-hand side of Element is very much the bookshop, shelves lining the walls on either side, but there’s also café seating here. Three two-person tables for a row down the middle, with a larger three-person table and an even larger four-person one at the back. Finally, a two-person window-bar occupies a tall, thin window to the left of a door in the back wall which opens onto Center Street. There’s also a cluster of four comfy chairs arranged around a low, round coffee table in the windows at the front, two waist-high, mobile bookstands screening it off from the rest of the shop.

The right-hand side is home to the coffee side of Elements, with seating restricted to a two-person window-bar which runs from the party wall to the second (right-hand) door. Books line the right-hand wall until it’s level with the start of the counter, after which the books are interspersed with bags of coffee and merchandising, while right in the middle of the wall is a large coffee menu, complete with pour-over choices. However, it doesn’t extend as far back as the other side, leaving room for an enclosed kitchen at the back.

The counter mirrors this split, with books occupying the left-hand side, extending halfway along the front. The rest of the front, where you pick up your coffee, has been left clear, while the till is around the corner on the right-hand side of the counter. This is followed by the pour-over bar and a two-group Black Eagle espresso machine, located on a short extension to the counter which sits between the end of the gap in the party wall and the start of the kitchen. Finally, the beer (and wine) part of Elements is at the back of the counter, where a large blackboard lists the options.

I’d already eaten at Time & Tide, so settled for a classic blueberry muffin to go with my coffee. Having had a cortado earlier in the day, I fancied a pour-over, opting for the Dionysus, a limited-edition Ethiopian Guji Guracho aged in bourbon barrels. Served in a large, black cup, it was definitely different, with a distinct, sweet, boozy flavour and a smell reminiscent of spirits. I’m not a bourbon drinker, so I took a sample home in my Frank Green Ceramic cup, where Amanda confirmed that it did indeed taste of bourbon.

I also brought a bag of the Kinesis espresso blend back with me, which has been going well through our cafetiere in the mornings. However, it’s really shone in its true role as an espresso, allowing me to get the most out of Amanda’s Coffee Gator Espresso Machine.