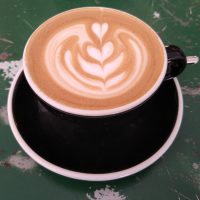 When it comes to speciality coffee in Köln, Ernst Kaffeeröster is one of the city’s pioneers, having first opened in 2014 on Bonner Straße, in the new town south of the centre. In true German fashion, Ernst Kaffeeröster is both coffee shop and roaster, and you can still see the original roaster, a 5 kg Diedrich, behind the counter at Bonner Straße, although these days it’s only used to roast some of the single-origins. Instead, there’s a 20 kg roaster in a dedicated facility, which opened in 2016, while in April, a month before my visit, a second coffee shop was opened on Weyertal, near the university.

The original Ernst Kaffeeröster is a modest spot, offering a handful of tables inside, plus two more outside on the pavement, along with a solitary bench. The draw is the coffee, with a blend and single-origin on espresso, along with batch brew, AeroPress and Kalita Wave if you prefer filter coffee. The single-origin espresso changes every month, while for AeroPress and Kalita Wave, you can have any of Ernst Kaffeeröster’s filter coffees. There’s also tea, hot chocolate, various cold coffee options and, if you’re hungry, a selection of pastries, cakes, baguettes and granola.

Ernst Kaffeeröster occupies a modest space on the western side of the busy Bonner Straße, a five-minute walk south of Chlodwigplatz, where multiple trams lines have stops. The façade is all glass, with a recessed door in the right-hand third, accessed via a couple of steps up from the pavement. If you want to sit outside, there are two thin tables in front of the window to the left of the door, each seating four on a pair of benches. These catch the morning sun, although a large canopy which extends from above the window provides some shade. Alternatively, a solitary two-person bench stands to the right of the door.

Inside, the layout is simple, with the counter at the back and the seating mostly arranged in the windows at the front or along the left-hand wall. To the right of the door, which opens to the right, is a narrow space, almost like a glass-walled box, where a single bench seat has its own, built-in table. Meanwhile, to the left are five three-person tables. Two line the broad bench which runs beneath the window, while two more are down the left-hand wall, which has a narrow bench running along it. Finally, in the middle of the space, to the left of the door, the fifth table stands in splendid isolation.

Ernst Kaffeeröster occupies the ground floor of an old building, which had two rooms, front and back. The seating is in the front  room, while the party wall has been knocked through, the counter now where the wall once stood. This is directly ahead of you as you enter, clear space between door and counter. There’s a set of retail shelves on the wall to the right, stocking Ernst Kaffeeröster’s full range of coffee in its distinctive black bags, a contrast to the coffee shop’s plain white décor.

The La Marzocco Linea espresso machine, with its twin Mythos grinders, is on the left, while the modest cake/pastry display is in a glass case on the right, leaving the centre free for a card reader and tablet, which acts as the till. Behind the counter, the original 5 kg Diedrich roaster takes pride of place, with a tall, multi-paned window at the back providing plenty of light, while an enclosed storeroom is off to the left.

Unusually, the coffee menu is on the wall to the right of the roaster, not the easiest to see from the counter, although there are multi-part menus on each table. Once you’ve ordered, take a seat and your coffee will be brought to you. As is often the case in German coffee shops, you only need pay when you leave.

I’d come for breakfast, starting off with a flat white, made with the house blend, resulting in a well-balanced, classic flat white with some beautifully steamed milk. I paired this with a slice of banana bread, which, in what seems to be the German way, was served cold and plain. That said, it was a very fine banana bread and delicious as it was.

I followed this up with the single-origin espresso, the Rwanda Nyamasheke, a washed Red Bourbon from the Mahembe washing station, produced by Justin Musabyimana. Based on tasting notes of plum, currant and tea with juicy citrus acidity, I was expecting something pretty funky, but it was surprisingly mellow, resulting in a very pleasant espresso.

You can see what The Coffee Vine made of Ernst Kaffeeröster from back in 2014, while if you’re interested in what the second coffee shop looks like (sadly I didn’t have time to visit) then The Coffee Vine has been there too!