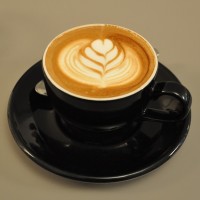 When the history of the recent explosion in speciality coffee in London is written, lots of attention will be given to central London and the influence that the Kiwis and Aussies had on the scene. However, I hope a chapter or two is dedicated the London borough of Ealing, so often overlooked, and to the early home-grown pioneers such as Munson’s and today’s Coffee Spot, Electric Coffee Co.

Sat right outside Ealing Broadway station at the end of the District and Central lines and on the mainline into Paddington, there’s really no excuse for not visiting Electric Coffee Co. (although one might ask where I’ve been in the almost three years since I started the Coffee Spot…). Half of the buses to Ealing also seem to terminate outside its doors, spilling out their passengers and almost begging them to go in for coffee.

For the last seven years, Electric Coffee Co., with husband and wife Simon and Oksana at the helm, has been serving fine coffee to commuters and residents alike. In a recent development, it has also begun roasting its own beans (initially under the name Automaton Precision Roasters, but now under the Electric Coffee Co. brand), in a dedicated roastery down in Sussex.

The front of Electric Coffee Co. is almost entirely glass, a single window running the full width, interrupted only by the glass door on the left, and stretching from ceiling almost to the floor. There are a pair of benches in front of the window, through which you can see the window-bar, ideal for bus watching and, beyond that, the brew bar, clearly stating Electric Coffee Co.’s credentials for all to see.

Stepping inside, it’s surprisingly peaceful, even when busy, such as during the morning rush, when the queue can reach the door. There’s a sense of space and light, helped by the generous window and high ceiling, although the store, which stretches out in front of you, decreases in both width and height towards the back, where it gets quite narrow.

The store is at its widest at the front. The aforementioned window-bar is immediately to your right, the counter taking up the rest of the right-hand side. The brew bar faces you/the window at the end of the counter. You can perch there to watch your coffee being made, but don’t expect a hand-poured filter during the morning rush!

Opposite the counter, a padded bench against the bare brick wall provides seating for a row of tables. This wall aside, the interior décor is entirely white, with plenty of bare light-bulbs for when it’s grey and miserable outside. The wooden-topped counter has metal grills on its front, which, combined with a concrete floor and bare strip-lighting hanging above the counter, provides an industrial feel in keeping with the name. This is reinforced by the Kees van der Westen Mirage and its three grinders (house-blend, single-origin and decaf), which form a fitting centrepiece to the counter.

Two steel girders act as pillars, holding up the ceiling, and effectively separate the counter and its queue from the tables. Even at the busiest times, if you’re sitting opposite the counter, you don’t feel crowded.

Beyond the counter, the store narrows (by the width of the counter) and the ceiling lowers. Originally the store ended here, but it was extended a few years ago. Now there are two rows of tables against the two walls, each with its own padded bench. Finally, beyond this, the store narrows again, with enough space for two bars against the left-hand wall. Multiple, bare light bulbs, plus more white-painted walls and ceilings make it a bright, welcoming space, even in the winter.

My first visit in January was for lunch, when I had a slice of homemade pepper, courgette and feta quiche, served warm with a crunchy salad which had an excellent, sharp dressing. I also had a flat white with Electric (house) Blend. It was sweet and smooth, the coffee going very well with the milk. I also tried the single-origin espresso, an Ethiopian Ayehu G3 Honey-processed coffee which was also very smooth and sweet, not at all what I was expecting.

I returned in May for breakfast, another flat white and some lovely crunchy, chewy, sourdough toast. Once again, my flat white was smooth and sweet, the perfect start to the day. I didn’t try the single-origin this time (a Kenyan), which changes every two weeks, while the brew bar offers a single choice of bean/method, changing every few days.

If you enjoyed this Coffee Spot, then take a look at the rest of London’s speciality coffee scene with the Coffee Spot Guide to London. You can also see what I made of Electric Coffee’s latest addition, it’s new coffee shop on Goldhawk Road in Hammersmith.