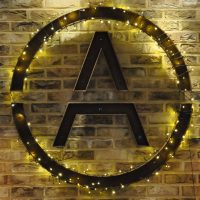 Artigiano is a chain that seems to be slowly colonising the west and southwest, anywhere, in fact, served by the old Great Western Railway out of Paddington. Starting with the original at St Paul’s in London (admittedly not served by any railway out of Paddington), there are now three more branches: Exeter, Cardiff and now this one in Reading, occupying a prime spot on Broad Street, right in the heart of the town.

Of all the Artigianos, this might be the most elegant, which is saying something since Artigiano prides itself on the elegance of its branches. It’s also the only one (so far) with an upstairs (although the now-defunct New Oxford Street branch in London and the equally defunct Queen Street branch in Cardiff both had a mezzanine levels) where the elegance is really taken to a new level with its sumptuous sofas and lounge area at the back.

Artigiano offers the same tried-and-trusted formula: speciality coffee by day (a bespoke house-blend and a seasonal single-origin on espresso) with craft beer and wine by night, Artigiano staying open late into the evening. A limited food offering is available throughout the day, backed up by a small range of cake.

November 2018: Artigiano Reading has now become Broad Street Bar and Kitchen. Thanks to Keith for the heads up.

Artigiano is on the appropriately-named Broad Street, with its own outside seating area in the middle of the pedestrianised street. There aren’t many tables out there, but don’t worry, there’s plenty of seating inside. Artigiano occupies a wide, two-storey building, the entire downstairs frontage occupied by multi-paned glass windows which flank the central, recessed, glass double doors. These can by pulled back, concertina-style, in good weather, connecting the interior with the pavement outside. Upstairs, the bare-brick façade is punctuated by three tall, narrow windows.

In keeping with all the Artigianos, there are two counters, a main food and drink counter, where you order, and a separate coffee counter, with its twin La Marzocco Strada espresso machines. In Reading, as in Exeter and Cardiff, these are on opposite sides, main counter to the left, coffee to the right. These also split the downstairs into two. At the front, there’s seating in the windows, with the seating to the left in particular being cosy, tucked in between windows and stairs. The right is more open, a communal table with attached seating squeezing in between the counter and a pair of tables in the windows. Opposite this, tucked in beneath the stairs, are a pair of armchairs, while there are some tables lining the middle of the room.

On the left, beyond the stairs, the counter takes up the rest of the space, but on the right, beyond the coffee counter, there’s lots more seating, with a row of tables down the middle and a long, padded bench with tables down the right-hand side. In keeping with the other Artigianos, the décor is elegant, with a tiled floor and plenty of exposed brick. The only natural light is at the front, so at the back, multiple light-fittings predominate.

Upstairs the pattern is repeated. There’s a large, open seating area at the front, with tables lining the windows. There are also tables in the middle of the room and, against the right-hand wall (opposite the stairs), there’s another padded bench, although this one’s at the front. The toilets occupy the equivalent space to the main counter downstairs, while the back part, just like its counterpart  downstairs, has more seating, although here Artigiano morphs into more of a wine bar than coffee bar, with sumptuous yellow sofas, straight ones in two pairs to the left, two large, round ones to the right. The seating is completed by three pairs of armchairs right at the back. It’s the sort of place you could lose yourself in for an afternoon without even trying.

Just for a change, I had a piccolo rather than my usual flat white. Artigiano’s seasonal blend, roasted by Cornwall powerhouse Origin, went perfectly in this, the coffee being very smooth and well-balanced and not overpowering the milk. I paired this with a slice of a poached pear and ginger tray bake from Bristol’s Cakesmiths. This was really lovely, awesomely gingery, and not too sweet.

In the evenings, Artigiano serves pizza, backed up with sharing plates of various nibbles. I was impressed and so stayed for dinner, ordering the roasted vegetable pizza. Unusually the pizzas are long and thin rather than round. Mine might have been the longest pizza I have ever seen! This, however, did not affect the taste, which was excellent.