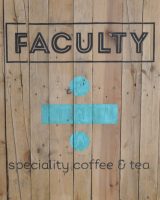 Faculty is now an old hand in Birmingham’s booming speciality coffee scene, having opened at the start of 2014. Located at the southern end of the beautiful Piccadilly Arcade, it’s right outside the New Street entrance of Birmingham’s New Street station and literally just around the corner from the new Yorks Café & Coffee Roasters.

Just like my write-up of Yorks a couple of weeks ago, this was meant to be a simple Coffee Spot Update, but it turned out that there had been sufficient change since my first visit two years ago to warrant writing a new post. Rather than going over old ground, if you want to read about Faculty’s roots and a little of the history of the amazing Piccadilly Arcade, then please take a look at the original write up. Otherwise, keep going…

Faculty’s a true multi-roaster, offering a single-origin on espresso and two more on V60, plus there’s a decaf option. If you don’t like the roaster/options, come back next week and the chances are they will have changed. There are cakes from Sixteen Kitchen, which occupies the unit next to Faculty, from where it serves breakfast, lunch and sandwiches in an interesting space-sharing operation.

What I hadn’t realised when I first visited in 2014 was that Faculty and the neighbouring Sixteen Kitchen, although separate businesses, cooperated with each other. Originally the two units were separate, Faculty on the right, Sixteen Kitchen on the left, but the two entrances have now been replaced with a single door. To facilitate this, part of the dividing wall has been removed, making it much clearer that the two businesses share the space. Although the change is fairly subtle, the effect is startling, Faculty feeling far more spacious than it did.

Layout-wise, not much has changed. The counter’s still at the back, while the seating’s in two rows at the front, one in the massive, floor-to-ceiling, wall-to-wall window, which lets in plenty of natural (albeit borrowed) light from the arcade. The second runs between counter and window, a mix-and-match of two- and four-person tables/school desks, stools for seating. Alternatively, you can sit at the end of the counter on one of three stools, watching your coffee being made at the brew bar.

The décor is still predominantly wood: wooden floorboards, wooden counter, wooden furniture. The walls and ceiling are whitewashed, except for the back wall, which is exposed brick. Two rows of bare bulbs, one above the counter, the other above the seating, supplement the light from the arcade.

Alternatively, head next door into Sixteen Kitchen. This can be busy at lunchtimes, but when the kitchen stops serving mid-afternoon, it becomes overflow seating for Faculty. The unit’s a mirror image of Faculty with the same all-encompassing window. The layout’s similar, counter at the back, while the seating’s a little more basic, with a pair of communal tables, one along the window, the other along the left-hand wall.

The two operate an excellent share-and-share-alike policy. You can order food in Sixteen Kitchen and sit in Faculty or order coffee in Faculty and sit in Sixteen Kitchen. Wherever you are, the staff will bring your order to you. Sixteen Kitchen serves breakfast until 11.30, with sandwiches and salads for lunch. There’s a choice of six sandwiches, two of which are vegetarian. I had a beautifully-toasted sandwich, the filling consisting nice, big chunks of mushroom, pepper and halloumi, offering contrasting tastes and textures.

Faculty’s coffee changes rapidly, the espresso altering every 10 days or so, the filter every few days! You can also buy retail bags of whatever’s on, plus there’s always some Square Mile retail bags.

During my visit in May, a Thunguri AA from Bath’s Round Hill Roastery was on espresso, with a Brazilian from Berlin’s The Barn on V60. This was a lovely, sweet, fruity, smooth and well-balanced coffee, pretty much the perfect pour-over, although while most filters evolve in complexity as they cool, I felt this one lost a little sweetness and balance. It was still very fine, but it left me chasing the first sip.

When I called back at the end of July, another Round Hill Kenyan (Kiriaini AB) was on espresso and also on pour-over, along with an Ethiopian Chelelektu. I asked the barista to surprise me and received an awesome pour-over in return. The first sip was exceptional, really juicy and very complex, but at the same time beautifully rounded.

I paired this with an equally awesome individual Oat Brownie. It had a really rich, gooey brownie topping on an oat base. I might have blown my palate with the brownie, since subsequent sips of my coffee never quite hit the same heights. Nevertheless, it’s one of the best filter coffees I’ve had this year.

I guessed, correctly, by the way, that this was the Kenyan, the same coffee that I had several times in Dublin, so it was interesting to compare. As good as the various Dublin offerings were (World of Coffee and Roasted Brown), this was easily the best of the bunch.

There’s a full write-up of Faculty, including a complete gallery, in its main entry. You can also see what I made of it in my original write-up, from August 2014.