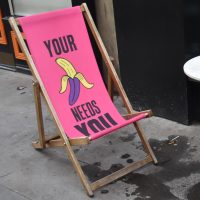 Regular readers will know that I’ve been following the rise of London-based/Aussie-inspired mini-chain Daisy Green ever since it opened a branch next to my office in Sheldon Square, Paddington. Since then, Daisy Green has grown rapid, first through its Beany Green coffee shops, and then through restaurants, such as Timmy Green in Victoria and Darcie & May Green, the narrow boats tied up outside Paddington Station.

Scarlett Green is the latest addition to the family, which now numbers nine coffee shops and restaurants. It follows in the footsteps of Timmy Green, offering full table service for food (breakfast, lunch and dinner), plus wine and cocktails, while still remaining true to its coffee roots, serving a house-blend from long-time partners, The Roasting Party.

Scarlett Green is the biggest yet, occupying the ground floor and basement of a tall, narrow building on Noel Street, in the heart of Soho. Open from 07:00 to midnight, it’s there for your morning coffee and a late-night cocktail, plus everything in between. The décor, as ever, is by the talented Shuby Art, another long-time partner and collaborator. As well as the usual bananas, you can also find a large, pink teddy bear enjoying Bondi Beach.

I could have easily missed Scarlett Green were it not for a pair of its trademark “Your Banana Needs You” deckchairs outside on the pavement on Noel Street. Compared to the majority of Beany/Daisy Greens, it has a modest exterior, although this hides a large, well-appointed interior, which, with the addition of a basement, harks backs to the original Daisy Green.

You enter via a central set of double-doors where you’ll be intercepted by the Maître d’ who has a podium to the right of the door, the first sign that you’re in a restaurant and not a coffee shop. There’s a DJ desk in the window to the right, while off to the left, a secluded four-person table occupies the other window. The counter, which doubles as a fully-stocked bar, runs down the left-hand wall, with the espresso machine at the front, followed by the alcohol, the bar itself lined comfortable, high bar chairs.

There’s a row of seats down the centre, starting with a sofa, followed by three four-person tables. Finally, in the front section, a padded bench runs along the right-hand wall, lined with seven two-person tables.

At the back, there are two alcoves, one to the right, the other in the centre at the back, both overlooking a light-well in the right-hand corner. The padded bench which runs along the right-hand wall turns the corner, extending into the right-hand alcove with a further three two-person tables, while at the far end, there are a pair of four-person booths. Other than the window-table at the front, these probably offer the most privacy upstairs. In contrast, the alcove at the back has a round, four-person table at the front, with an L-shaped bench along the left-hand and back walls, with alternating four-and two- person tables, seating twelve in all.

The stairs to the basement are in the far left-hand corner, where you’ll find plenty more seating, plus the kitchen. This is semi-open, running along the back wall, bar-seating at the front. The basement seating is more eclectic, with a collection of various round and square four-person tables, plus two booths against the right-hand wall. On the left, there’s a bar at the back, with sofas at the front before you reach a lovely, secluded alcove, with an n-shaped padded bench.

Scarlett Green has a standard, espresso-based coffee menu. I was there for dinner, but was early, so had an espresso to start with, a lovely, smooth, well-balanced coffee, the sort I’ve come to expect from The Roasting Party. My friend Kate arrived on time for dinner, ordering a guava bellini cocktail, which she really enjoyed (prosecco, guava and pink grapefruit).

For dinner, we started with the yogurt potato flatbread, Byron bhel puri salad and Halloumi fries, which we shared, the flat bread proving particularly tasty, as did the third Halloumi fries. For our mains, Kate had a chateaubriand steak plus duck fat fries, while I indulged in the black cod, a very fine, flaky cod, smothered in a really interesting sauce, with an extremely tasty salad on the side.

To round things off, Kate when for the Melbourne Mars bar cheesecake, one of my favourites, while I had the Pavlova for a change. Both were excellent, although since the cheesecake was the size of a cricket ball, I ended up with half of it. We rounded the evening off with a raspberry sour for Kate (gin, raspberries, lime and egg white) while I played it safe with a classic gin & tonic. It was an excellent meal, with Scarlett Green adding another dimension to the Beany Green stable.

December 2018: Scarlett Green was a runner-up for the 2018 Coffee Spot with the Best Basement Award.

You can also see what I made of all the other branches of Daisy/Beany Green that I’ve visited.

Disclaimer: Daisy Green launched a bond in 2015 to fund future expansion. I was an investor in this bond, although by the time I visited Scarlett Green, the bond had been repaid. Since my visit, I have become an investor in Daisy Green as part of a round of further investment funding. As an investor, my dinner was paid for by Daisy Green.

My decision to write about Scarlett Green was in no way influenced by my investment.