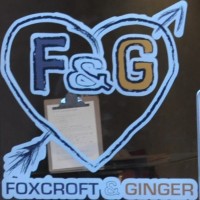 It’s been almost two years since I first visited Foxcroft & Ginger on Soho’s Berwick Street, drawn by the recommendations of my friend Hayley and the descriptions of the legendary muffins. Since then I’ve been an irregular visitor, drawn back by the mis-matched crockery (which, although depleted in number, is still there) and, more importantly, the gorgeous basement, still a benchmark for Coffee Spot basements everywhere.

Although the number of Coffee Spots staying open into the evening has been steadily expanding, with the likes of Villiers joining the more-established Notes and Fernandez & Wells, Foxcroft & Ginger offers another alternative for those looking for good coffee in the evenings. It helps that between them they offer a wide variety of excellent food (and wine) to go with their outstanding coffee.

So, what has changed in the two years since I first went to Foxcroft & Ginger? Well, on the one hand, not a great deal, but on the other hand, quite a bit. Sometimes Coffee Spots re-invent themselves, but, in the case of Foxcroft & Ginger, it’s been a steady evolution, rather than revolution, which has driven change.

The biggest change at Foxcroft & Ginger is probably the least obvious to the casual visitor. The coffee used to be from Has Bean and Caravan, but about a year ago, one of my favourite roasters, Winchester’s The Roasting Party started supplying both espresso and filter coffee. Regular readers will know that I really enjoy The Roasting Party’s coffee at my usual haunt, Beany Green in Paddington, so I won’t say much, except that I’ve had a variety of the coffee, mostly filter, during my visits, and it’s never disappointed.

The other major (and slightly more obvious) change is in the basement. I’d still described its look as unfinished, only now it’s slightly more finished than before! The walls still look undecorated, the ceiling, the usual mess of pipework, and the stairs continue in used as a flour store, piled five or six sacks high. It’s lost none of its charm, but feels a lot less chaotic. Somehow the tables seem more ordered, while the random assortment of cushions on the benches have been replaced with a smart, red, padded bench.

During the day, the basement’s still a laid-back coffee lounge, but come evening it’s a slightly more formal dining spot, complete with table service. If you’re coming for coffee in the evening, be prepared to sit upstairs, since downstairs can be reserved for diners only, especially when busy.

Upstairs, the old vaulting horse in the window has gone (to the branch in Whitechapel). However, the row of tables along the right-hand side, opposite the stairs, is still there, along with the counter at the back. This encloses a small food-preparation area, coffee on the right and, on the left, pizza ovens which I’m sure weren’t there two years ago. The main kitchen’s still to the left at the bottom of the stairs.

During my original visit, I didn’t sample the food, focusing on the coffee and the awesome muffins (which, I’m pleased to say, are still there). Since then, other than the odd day-time visit, I’ve returned in the evenings, sampling the food menu, with an emphasis on pizza.

During my last two visits, I tried two pizzas, the first accompanied by a basket of bread plus an enormous bowl of olives, and the second by a tomato fondue. This was, in consistency and taste, reminiscent of a (warm) pizza sauce and surprisingly pleasant.

The first pizza was herbed mushroom and egg, which was awesome, while the second, a goat’s cheese, fig, kale pesto and mascarpone concoction with marinated beetroot, was interesting. I enjoyed it, but let’s just say it’s not what I’d put on a pizza!

I’m looking forward to many more visits as I make my way through the menu.