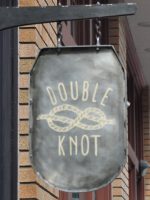 Philadelphia’s Double Knot is a collaboration between local restaurateur, Michael Schulson, and Evan Inatone, the man behind Elixr, which roasts all the coffee. From the outside, Double Knot seems a very modest place, but step inside and you’ll soon realise that no expense has been spared! The sumptuous interior is gorgeous, while Double Knot boasts a full Modbar installation.

It doesn’t stop there. Double Knot also has a full service restaurant downstairs in the basement (which is bigger than the coffee bar upstairs!) which, from 5 o’clock onwards, serves Sushi & izakaya. If you get a chance, do pop down, since it’s as sumptuously-appointed as the upstairs.

Talking of which, upstairs starts the day as a coffee bar, with cakes and breakfast on offer, while at lunchtime, there’s a small (but excellent) menu from the kitchen downstairs. Then, mid-afternoon, it starts its transformation, becoming a cosy bar in the evening, although the coffee and food are available all day.

The coffee just as impressive, with a house-blend and single-origin joined by a decaf on espresso, plus four single-origins on filter which change every month or so. If that wasn’t enough, there’s a fully stocked bar and, naturally enough, coffee cocktails!

March 2018: Popped back to visit Double Knot on my return to Philadelphia, partly to admire the Modbar… Not a lot has changed, although these days Double Knot only does the house-blend & decaf on espresso, reserving the single-origins for pour-over. It’s still as beautiful as ever though.

Double Knot’s just south of Philadelphia’s City Hall, an area that’s rapidly becoming a specialty coffee hub, with the likes of La Colombe, Square One, Greenstreet and Elixr a few blocks away. Despite such illustrious neighbours, Double Knot’s one of the most unobtrusive coffee shops I know. Most have the name outside, or windows that show you the fancy espresso machine inside, but there’s none of this on South 13th Street. Instead, there’s a plain wooden door, inset in a multi-paned, frosted window. Only a modest A-board and equally modest sign give you any indication that you’ve come to the right place. It’s almost as if you weren’t supposed to find the place…

What immediate sprang to mind was a speakeasy, an illicit bar that those in the know are aware of, but which doesn’t care to attract attention to itself. Stepping inside, that impression is reinforced by a long, thin space, complete with subdued lighting and a massive bar/counter running down the left-hand side. However, that’s some way off, the immediate area around the door being fitted out more like a comfortable library/reading room.

There are two pairs of very comfortable armchairs to the right, the shelves on the walls behind them lined with books and newspapers. It’s a lovely spot to relax with your coffee, the only slight downside being a constant stream of customers coming in and out. Beyond this is the main part of Double Knot, counter on the left, and a long, padded couch on the right, lined with small tables. Finally, a four-person bar lines the back wall.

The interior’s beautifully fitted out, with glorious light-fittings (the only natural light is from the window right at the front). Mirrors abound, adding to a sense of space, while Double Knot has one of the best tiled floors I’ve seen.

I visited Double Knot in its first week of operation, having had it recommended by no fewer than three baristas in three different coffee shops. And this was just on my first day in Philadelphia! I brought along my friend, Greg of Coffee Guru App, and we were treated to pretty much a full run down of the menu.

We started with a Costa Rica pour-over, using the Kalita Wave (via the Modbar). This was a really sweet, incredibly well-balanced coffee that we paired with some of the cakes on offer, sharing a coffee cake and a lemon bar. The coffee cake reminded me of a buckler, with a crumble top and a really rich, filling cake, while the lemon bar was also incredibly rich and very lemony. Next, I was treated to something from the lunch menu, which, cunningly, I forgot to make any notes about, although I do remember enjoying it. For more on the food, including the downstairs restaurant, try this piece by the Philadelphia Magazine.

We rounded things off with an Espresso Diablo, a coffee cocktail with tequila, chillies and a double espresso. It was as hot as it sounds!

I returned the following day to take some photos and was treated to the espresso. Double Knot has a house-blend, Bee Keeper (50/50 Brazil/Colombia) and a single-origin, which goes by the name Lunar Lander. This changes every month or two: during my visit, it was from Ethiopia. The decaf is a single-origin as well.

I found the Lunar Lander a bit sour for my palate, with very much a back-of-the-mouth taste. However, I really enjoyed the Bee Keeper, which was much more balanced, with a really rounded mouthfeel. Both were served, as I would have expected, with a glass of sparkling water.