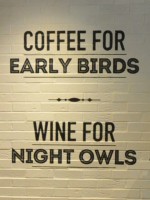 Notes was always more than just a coffee shop, mixing coffee by day with wine and small plates of an evening, in surroundings that spoke of elegance. For a while, there was Trafalgar Square, Covent Garden and various coffee barrows. Then, two years ago, along came a roastery and now, within the space of a year, four new stores, with a heavily over-subscribed foray into crowd-funding to fund further expansion (albeit at the expense of Covent Garden and all but one barrow).

King’s Cross/St Pancras, just north of King’s Cross, between Noble Espresso (now Craft Coffee) and Caravan, is the first of the new Notes that I’ve visited (I’ve since between to both the Canary Wharf and Crossrail Place locations). Smaller (and hence more intimate) than the original Notes, you can sit downstairs, opposite the counter, or upstairs in the cosy mezzanine. Alternatively, try the great selection of outdoor seating on the secluded Pancras Square.

With coffee roasted at the nearby Notes Roastery, there’s a single-origin (which changes every couple of months) and decaf on espresso. Another single-origin is on filter, available either as a V60 or bulk-brew. This changes every few days, Notes rotating through its selection of single-origins as each bag runs out.

July 2020: Notes has now reopened, although the upstairs seating is currently closed due to COVID-19. See what I made of it when I visited in August.

Notes, long, thin and tall, has two walls made almost entirely of glass. Approached from the north, the door’s on the left of the narrow side. Outside, a square, three-person table stands to the right of the door, which, along with a row of square, four-person tables by the windows, is undercover, protected from the sun/rain. Next to them, rows of round, four-person tables line the open space of Pancras Square, running parallel to Notes’ long side.

Immediately ahead of you as you enter, the counter occupies most of the left-hand side. There’s a low, two-person table immediately to your right, with three high, square three-person tables against the right-hand windows opposite the counter. At the back, a takeaway podium is followed by stairs, which, doubling-back on themselves, lead to the mezzanine above the counter. To the left, underneath the stairs, is the toilet.

The mezzanine’s a tapering wedge, widest at the back by the stairs. A well-cushioned bench runs down the left-hand wall, four round, two/three-person tables cantilevering from the wall. Opposite this, overlooking the store below, is a four-person table by the stairs, followed by two three-person round tables. At the apex, just above and left of the door, is a four-person, oval table.

The décor’s wood and metal, a surprisingly harmonious mix, while the counter is a lovely, wooden block affair. The windows mean it’s very bright, although on the May evening and overcast Sunday afternoon I was there, the multiple interior lights were absolutely necessary! It can be noisy, but nowhere near as bad as Trafalgar Square, which can be painfully loud. At least, I thought so until I was trapped upstairs between two tables who reacted to being in a noisy environment by competing with everyone to see who could talk the loudest!

The espresso was a Gedeb (Ethiopia Yirgacheffe). Although it’s taste that ultimately counts, it was the worst-looking espresso I’ve had in ages and pretty cool by the time it arrived. A bright, acidic coffee, it was perfectly drinkable though. In the staff’s defence, they were very busy and, shortly after I ordered, the heavens opened, sending the customers outside scurrying for cover, while the staff rushed to clear the tables. So, it’s possible my espresso had been standing for a while before I got it. Under such circumstances, there are plenty of baristas who’d have pulled the shot again, but ultimately there was nothing that merited sending it back.

To accompany my espresso, I snaffled the final Crosstown Doughnut, served with a rather superfluous cake fork. After an experimental prod or two, I abandoned it for the more traditional (and messy) method of picking it up with my fingers. It did not disappoint: a solid, tasty dough with a crisp, caramelised sugar glaze, encasing the perfect vanilla custard filling, rich and tasty without being overly sweet.

Wanting to give the coffee another try, I had a piccolo. For me, the Gebed goes much better with milk, the sweetness taking the edge of its acidity. On my previous (evening) visit, I’d had a decaf piccolo which was just as lovely.

Notes’ food is also impressive. First time around, I’d had the vegetarian plate, a delicious and varied selection of goodies. This time I bagged a mackerel fishcake salad to eat on the train.

You can see what fellow coffee-blogger, Bex, makes of Notes in her blog Double Skinny Macchiato.