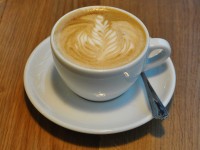 For the longest time, Canary Wharf, and the area around it, was a desert when it came to quality coffee. Then along came Taylor Street Baristas, with a second branch in nearby South Quay (both now gone). Also expanding east is Notes, the coffee-and-wine outfit which now roasts its own coffee and boasts five outlets, including King’s Cross, Moorgate and a branch in Canary Wharf tube station.

The latest Notes is also at Canary Wharf, this time in Crossrail Place, the new station for the Crossrail line. It doubles as a shopping centre, which opened in May 2015, despite Crossrail itself being several years from completion. Notes is on the ground floor and, in an area where businesses tend to keep to office hours and shut at the weekends, it refreshingly stays open late into the evening, as well as at weekends, serving Notes’ familiar mix of speciality coffee, wine, craft beer and small plates.

The newer Notes have outstanding designs and Crossrail Place is no exception. Even though it lacks the mezzanine level of King’s Cross, Crossrail Place might well be my favourite, squeezing itself into a weird space with some aplomb. Needless to say, the coffee is very good as well!

Situated on the ground floor of the new Crossrail building, which itself sits on an artificial island in the middle of North Dock, on the northern edge of Canary Wharf, Notes is fairly easy to find once you know roughly where you’re going.  If you’re familiar with the newer Notes, such as Moorgate and King’s Cross, it will hold no surprises in either look or feel. There are the floor-to-ceiling windows extending around two sides, plus tables on the pedestrian walkway outside. Although there’s not much of a view, they make a pleasant enough option when the weather’s nice, not really being sheltered enough when it’s raining.

Inside, it’s bright and airy, with high, exposed ceiling. Midway between King’s Cross (smallest) and Moorgate (largest) in size, the cosy atmosphere’s more in keeping with King’s Cross than Moorgate. The shape is weird though, even by Notes’ recent standards, the floor plan bring to mind a croissant with a flat front edge (it’s long and thin, with a bulge in the middle).

The flat edge, which runs along the southern edge of Crossrail Place, is all windows, the door about one third of the way along on left, opposite the bulge. There’s seating to the left, where the far end is also a window, with the bulk of the seating to your right. Ahead and to the right is an L-shaped island bench in the centre of the room, behind which is the counter. Initially slightly disorientating, it is in fact an incredibly clever use of the space, since it channels you to the left, which in turn leads you along the counter, past the cake, to the till. You then keep going past the twin espresso machines to collect your (takeout) coffee.

If you’re staying in, grab a glass of water and head for your seat, which could include one of several window-bars, tables, benches or the island bench itself. If you do sit there, don’t worry about feeling as if everyone will be constantly walking around/past you (a frequent problem in coffee shops). The seating is cleverly screened from the counter, making it a delightful spot.

I’d popped into Notes for breakfast, having surprisingly found myself in Canary Wharf first thing in the morning. Naturally, I chose a flat white to start my day and was rewarded with a rather fruity, punchy drink which left me feeling that I’d probably find the espresso, on its own, a little too much for my palate. In milk, however, it was ideal.

If I have one slight criticism of Notes is that it’s quite hard to see what coffee is on espresso or in the batch brew filter (no pour-over options here). Although the coffee shop in Canary Wharf station has a board explaining which beans are on, I looked around in vain for one here or at King’s Cross. With that in mind, I believe I had the San Juan espresso, a single-origin (Notes only roasts single-origins) from Guatemala, but I’m not 100% sure.

I paired this with some very fine and crunchy sour-dough toast, served with a couple of packets of butter. However, the jam, rather than coming in an undersized pot, as is often the case, arrived in a huge dollop on a little saucer, something of which I heartily approve.